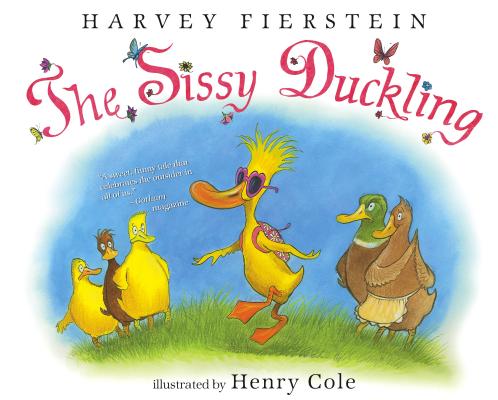 By Harvey Fierstein, Henry Cole (Illustrator)
List Price: $9.99
Our Price: $8.99
(Save: $1.00 10%)
On Our Shelves Now at:
Elmer is not like the other boy ducklings. While they like to build forts, he loves to bake cakes. While they like to play baseball, he wants to put on the halftime show. Elmer is a great big sissy. But when his father is wounded by a hunter’s shot, Elmer proves that the biggest sissy can also be the greatest hero.

Acclaimed actor and playwright Harvey Fierstein has crafted a heartwarming story, based on his award-winning HBO animated special, about learning to embrace the special qualities we all possess. Henry Cole’s gently humorous illustrations give it a new vitality. This is a book to share with all children, to help them understand that each one of them is unique and valuable.
Harvey Fierstein is a four-time Tony Award-winning writer, actor, and gay-rights activist. In 1983, he received two Tonys for writing and starring in Torch Song Trilogy, received a third Tony the following year for writing La Cage aux Folle, and another in 2003 for Best Actor in Hairspray. Film audiences know him best for his scene-stealing antics in Mrs. Doubtfire and Independence Day, and he lent his trademark gravelly voice to Disney’s Mulan as Mulan’s soldier friend. He has made numerous TV appearances, including an Emmy-nominated appearance on Cheers and on a classic episode of The Simpsons as Homer’s assistant, Karl. Children know him as the Easter Bunny from the Emmy-winning Elmo Saves Christmas. Harvey also wrote the book for the play Kinky Boots, which won the 2013 Tony for Best Musical.

Henry Cole has written and illustrated more than 150 books for children, including Spot, the Cat; And Tango Makes Three; Oink?; and Little Bo in France. He is also the illustrator of With a Little Help from My Friends by John Lennon and Paul McCartney. A former elementary school teacher, he now writes and paints full time.