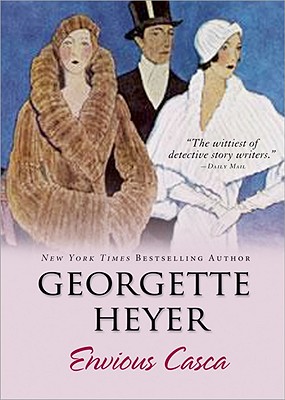 This is book number 9 in the Country House Mysteries series.

A holiday party takes on a sinister aspect when the colorful assortment of guests discovers there is a killer in their midst. The owner of the substantial estate, that old Scrooge Nathaniel Herriard, is found stabbed in the back. While the delicate matter of inheritance could be the key to this crime, the real conundrum is how any of the suspects could have entered a locked room to commit the foul deed.

For Inspector Hemingway of Scotland Yard, the investigation is complicated by the fact that every guest is hiding something—throwing all of their testimony into question and casting suspicion far and wide. The clever and daring crime will mystify readers, yet the answer is in plain sight all along...

"Miss Heyer's characters and dialogue are an abiding delight to me...I have seldom met people to whom I have taken so violent a fancy from the word 'Go'." — Dorothy L. Sayers

"A writer of great wit and style." — Daily Telegraph

"Ms. Heyer is one of the most entertaining writers I have ever ready." — Reading Extravaganza