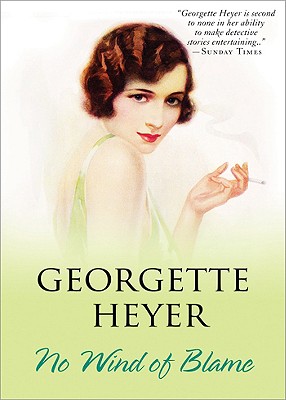 This is book number 8 in the Country House Mysteries series.

The superlatively analytical Inspector Hemingway is confronted by a murder that seems impossible?no one was near the murder weapon at the time the shot was fired. Everyone on the scene seems to have a motive, not to mention the wherewithal to commit murder, and alibis that simply don't hold up. The inspector is sorely tried by a wide variety of suspects, including the neglected widow, the neighbor who's in love with her, her resentful daughter, and a patently phony Russian prince preying on the widow's emotional vulnerability and social aspirations. And then there's the blackmail plot that may?or may not?be at the heart of the case?

"Our Georgette Heyer display of the Sourcebooks reprints has been a huge success, not only to those early fans like myself, but to many new readers who appreciate her style and wit."

"Reading Georgette Heyer is the next best thing to reading Jane Austen."

"Wonderful characters, elegant, witty writing, perfect period detail, and rapturously romantic. Georgette Heyer achieves what the rest of us only aspire to."

"Heyer may have been the Queen of Regency Romance but she sure could write a good solid mystery." — Gumshoe Review

"Just the right mixture of entertainment and secrets to keep a reader intrigued and hooked until the last page." — Reading Extravaganza

"If you enjoy mystery, humour and a pinch of romance, you'll be entertained by No Wind of Blame." — Book-a-Rama

"Of the Georgette Heyer mysteries that I've read so far, No Wind of Blame is one of my favorites." — We Be Reading

"A most entertaining story for a rainy afternoon with a pot of tea. " — Apprentice-Writer

"I’m so glad a Georgette Heyer novel has returned to my life!" — Mystery Librarian

"If you are a mystery fan, especially of the witty, clever English country house sort, you do really owe it to yourself to check out No Wind of Blame. " — A Lovely Shore Breeze

"A brilliantly crafted murder mystery as only the late Georgette Heyer was able to craft. " — Rundpinne