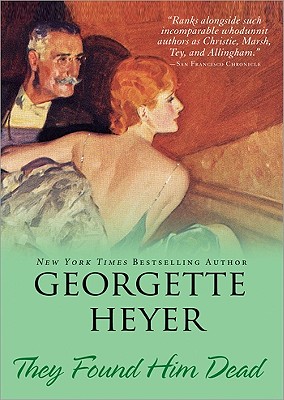 This is book number 6 in the Country House Mysteries series.

One heir after another turns up dead…

Silas Kane's sixtieth birthday party is marred by argument and dissension amongst his family, and then the next morning, Kane is found dead. The coroner's verdict of death by misadventure would seem to confirm that Silas accidentally lost his way in the fog. But then his heir is shot, and threats are made against the next in line to inherit his fortune. The formidable Superintendent Hannasyde is called in to investigate. All clues point to an apparently innocuous eighty-year-old woman, but as the Inspector delves further into the case, he discovers that nothing is quite as it seems…

"The writing style reminded me of Agatha Christie." — Palmer’s Picks for Reading

"One of my favorite mysteries from Heyer. " — Okbo Lover

"Heyer brings her characters to life on the page with all their distinct personalities, weaknesses, strengths and loyalties." — Pudgy Penguin Perusals

"Each character description is precise, right down to their clothes and hobbies, making them vivid and easy to remember. " — Thoughts From and Evil Overlord