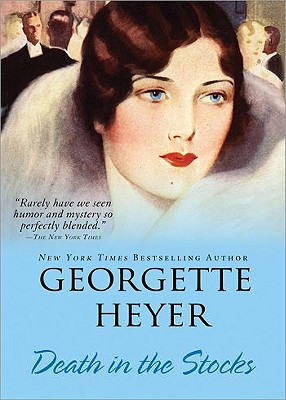 This is book number 4 in the Country House Mysteries series.

"Death in the Stocks is rare and refreshing."—The Times

A Moonlit Night, a Sleeping Village, and an Unaccountable Murder...

In the dead of the night, a man in an evening dress is found murdered, locked in the stocks on the village green. Unfortunately for Superintendent Hannasyde, the deceased is Andrew Vereker, a man hated by nearly everyone, especially his odd and unhelpful family members. The Verekers are as eccentric as they are corrupt, and it will take all Hannasyde's skill at detection to determine who's telling the truth, and who is pointing him in the wrong direction. The question is: who in this family is clever enough to get away with murder?

"Miss Heyer's characters act and speak with an ease and conviction that is refreshing as it is rare in the ordinary mystery novel."—Times Literary Supplement

"It's impossible to say how much I enjoyed this mystery. All I can say is when I came to the last page I wanted to read another book by the same author. " — Read with Tea

"Georgette Heyer, where the devil have you been all my life? And why have I not also been there? You are so WINSOME!" — Books I Done Read

"A hysterical and suspenseful novel that will keep you on the edge of your seat… if you don’t fall out from laughing first!" — The Long and Short of It

"How wonderful to read a witty, well written who done it... A real pleasure for sure." — Libby’s Library News

"Curl up on your couch with a cup of tea and this book for a perfect night of reading. " — Book Nerd Extraordinaire

" If you like Agatha Christie mysteries who will certainly enjoy this book." — My Book Addiction and More

"Hands down, one of her best." — Romance Reader at Heart

"I would recommend this fun 1930s romp to mystery lovers. " — Psychotic State