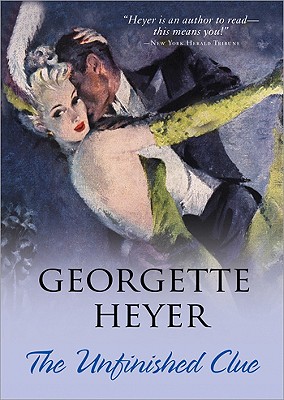 This is book number 3 in the Country House Mysteries series.

A houseful of people he loathes is not Sir Arthur's worst problem?

It should have been a lovely English country-house weekend. But the unfortunate guest-list is enough to exasperate a saint, and the host, Sir Arthur Billington-Smith, is an abusive wretch hated by everyone from his disinherited son to his wife's stoic would-be lover. When Sir Arthur is found stabbed to death, no one is particularly grieved—and no one has an alibi. The unhappy guests fi nd themselves under the scrutiny of Scotland Yard's cool-headed Inspector Harding, who has solved tough cases before—but this time, the talented young inspector discovers much more than he's bargained for.

"Miss Heyer has the delightful talent of blending humor with mystery."—Boston Evening Transcript

"Miss Heyer's characters and dialogue are an abiding delight to me... I have seldom met people to whom I have taken so violent a fancy from the word 'Go.'"—Dorothy L. Sayers

"These mid-twentieth century British mysteries amply display Heyer’s gift for characterization and plotting (not to mention her wickedly sharp sense of humor), and are sure to please both fans of her romances and classic English mystery buffs." — Word Candy

"The mystery was clever, and the world-building and pacing were very good." — Genre Review

"[I] found the mystery in The Unfinished Clue really well-done, with information given at just the right points to keep me guessing and re-guessing until the finale." — The Book Zombie