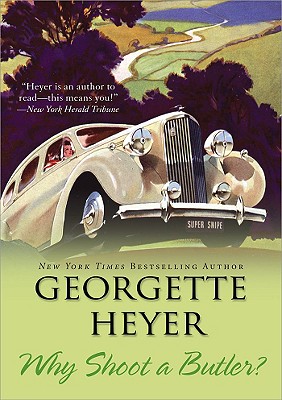 This is book number 2 in the Country House Mysteries series.

"Miss Heyer's characters and dialogue are an abiding delight to me." —Dorothy L. Sayers

Every family has secrets, but the Fountains' are turning deadly?

On a dark night, along a lonely country road, barrister Frank Amberley stops to help a young lady in distress and discovers a sports car with a corpse behind the wheel. The girl protests her innocence, and Amberley believes her?at least until he gets drawn into the mystery and the clues incriminating Shirley Brown begin to add up?

In an English country-house murder mystery with a twist, it's the butler who's the victim, every clue complicates the puzzle, and the bumbling police are well-meaning but completely baffled. Fortunately, in ferreting out a desperate killer, amateur sleuth Amberley is as brilliant as he is arrogant, but this time he's not sure he wants to know the truth?

PRAISE FOR WHY SHOOT A BUTLER?

"If genteel mysteries are your cup of tea, you have here a steaming teapot just waiting to be poured."— Bestsellers

"Georgette Heyer is second to none."— Sunday Times

"Heyer is an author to read ? this means you!"—New York Herald Tribune

" While many of the plot elements in Why Shoot a Butler? are familiar, Heyer’s light, stylish touch makes them feel classic. " — Word Candy

"[A] delightful and pleasant read with plenty of clever dialogue and witty humor..." — Reading Extravaganza

"This was all I could have wanted in a mystery and... there was even a bit of romance." — We Be Reading

"[A] clever, witty romp, the whole upstairs/downstairs thing going on, with even a touch of a romance thrown in." — A Lovely Shore Breeze

"[I]t's the characters that really shine. They're varied, interesting, and entertaining... I enjoyed every minute I spent reading the book." — Genre Reviews

"Why Shoot a Butler? demonstrates once again the acclaimed Queen of Regency's deftness in juggling a large cast of well-defined characters and a tangled plot-web. " — Bookloons.com

"The appeal of cozies has always included well-drawn characters as well as a crime-puzzle. As befits a writer justly renowned for characterization, Georgette Heyer delivers with a vengeance in Behold, Here's Poison." — Book Loons

"...[D]raws the readers into the upper class world of the English country house." — Reading Adventures