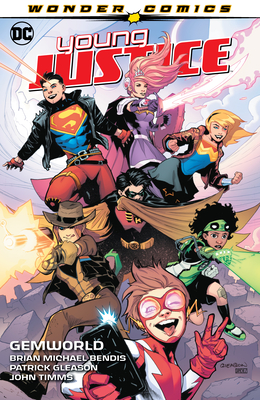 
Not On Our Shelves—Ships in 1-5 Days
Superboy! Wonder Girl! Robin! Impulse! Amethyst! All united in Young Justice! The hottest new super-team, written by award-winning author Brian Michael Bendis as part of his imprint Wonder Comics!

When the nightmare dimension known as Gemworld invades Metropolis, teen heroes will unite to deal with the situation--but they're quickly shocked to discover the battle may be the key to the return of Conner Kent, a.k.a. Superboy!

Aimed at providing readers with honest and innovative reading experiences, Brian Michael Bendis' Wonder Comics is a celebration of the moments in life when discoveries are made -- when purpose and meaning are revealed and destinies are defined. Featuring the young heroes of the DC Universe as penned by all-star creative teams in exciting new adventures that will celebrate the wonders of life, love and comics.

Collects trades Young Justice #1-6.
Brian Michael Bendis is an award-winning comics creator, New York Times bestseller and one of the most successful writers working in mainstream comics. In his 20 years at Marvel Comics, he produced some of the greatest graphic novels the publisher has ever seen, including Daredevil, Ultimate Spider-Man, New Avengers, House of M, Secret Invasion, Age of Ultron, Alias, All-New X-Men, Uncanny X-Men, Iron Man, Guardians of The Galaxy and many more. Bendis is also known for his creator-owned works, including Powers, Scarlet, Brilliant, Goldfish, Fire, Jinx and Torso. He lives in Portland, Oregon with his family.