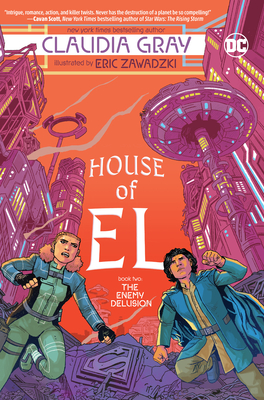 
Not On Our Shelves—Ships in 1-5 Days
Welcome to a brand-new vision of one of comics' most famous tragedies, from New York Times bestselling author Claudia Gray and illustrator Eric Zawadzki. In this second book of a graphic novel trilogy, two teenagers on opposite sides of the same extinction-level event get drawn deeper into conspiracies that could doom them--if the planet doesn't self-destruct first.

Sera is a young soldier, bred her entire life to fight for Krypton. She would die for this planet, but she's never had the time or inclination to enjoy it. Zahn, however, is a young scientist, full of hope and ideas for how to improve Krypton for all its citizens. And yet, the cracks in his world are beginning to appear. In fact, both Sera and Zahn are unique in ways that will soon drive them from their destinies and toward each other--toward a cataclysmic ending to all that they once held true.

Having learned of Krypton's possible fate, Sera and Zahn find it increasingly difficult to continue with their everyday lives. Sera's enhanced fighting skills may impress General Zod, but they seem to raise suspicions among her fellow soldiers. Zahn finds it equally challenging to maintain his studies and his friendships, as he carries both the knowledge of an underground rebel group's plans and the experiments conducted by Jor-El and Lara. Jor-El himself attempts to alert the tribunes about the looming danger to the planet.
Claudia Gray is the New York Times bestselling author of many science fiction and paranormal fantasy books for young adults, including the Defy the Constellation series, the Firebird series, the Evernight series, the Spellcaster series, and Fateful. She's also had a chance to work in a galaxy far, far away as the author of the Star Wars novels Lost Stars, Bloodline, Master and Apprentice, and Leia: Princess of Alderaan. Born a fangirl, she loves obsessing over geeky movies and TV shows, as well as watching any series with British people solving murders in picturesque settings. She will take your Jane Austen trivia challenge any day, anytime. Currently she lives in New Orleans.

Eric Zawadzki grew up in Vancouver, but he's recently relocated to Calgary. He's most well-known for the critically aclaimed THE DREGS and ETERNAL. His most recent work in comics is HEART ATTACK, for Image / Skybound comics, which he co-created and illustrated.