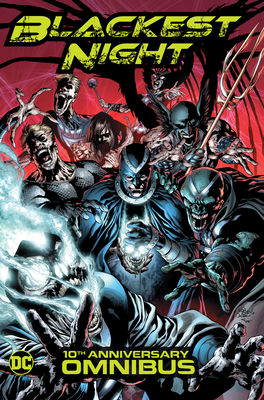 
Backordered
The haunting epic that plunged the DC Universe into darkness collected in its entirety for the first time ever! The Blackest Night is now here. As black rings rain from the sky former, friends and loved ones rise from their graves as twisted monsters with only one mission: Death.

The Black Lanterns have arrived, and they're bringing death and destruction with them. Putting aside old vendettas, it's now up to Hal Jordan and the Green Lantern Corps to marshal DC's greatest heroes (as well as their deadliest foes) in a huge, universe-spanning battle to save the DC Universe from an army of the dead. Their collective mission: to defend the light against the blackest night.

Johns was born in Detroit and studied media arts, screenwriting and film at Michigan State University. After moving to Los Angeles, he became an assistant to Richard Donner, director of Superman: The Movie. He and his mentor Donner later co-wrote Superman: Last Son featuring the return of General Zod.

Johns has written for various other media, including episodes of Smallville, Arrow and Adult Swim's Robot Chicken, for which he was nominated along with his co-writers for an Emmy. Johns was an executive producer on the 2016 film Batman v Superman: Dawn of Justice and co wrote the 2017 hit Justice League as well as the upcoming Wonder Woman 1984 film starring Gal Gadot. Johns currently resides in Los Angeles, California.