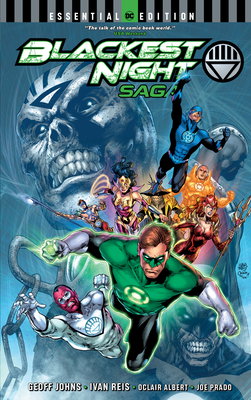 
Not On Our Shelves—Ships in 1-5 Days
The prophecy of the Blackest Night has come to pass--a mysterious force is raising deceased heroes and villains into an army of undead Black Lanterns! The combined might of the Green Lantern Corps and an armada of living superbeings must now band together in a fight quite literally for their lives. The incredible saga from #1 New York Times bestselling writer Geoff Johns is collected here in its entirety for the first time ever in paperback in this new DC Essential Edition!

A war has been brewing between the different colored Lantern Corps--the Green fighting the Yellow, the Red trying to destroy all, the Blue attempting to broker peace between the tribes. However, the real battle is yet to come: the undead Black Lanterns are coming and seemingly nothing can stop them. Putting aside old vendettas, it's up to Hal Jordan and the Green Lantern Corps to lead DC's greatest champions as well as their deadliest foes in a battle to save the Universe from an army of the dead.

The DC Essential Edition series of graphic novels highlights the best standalone stories the medium has to offer featuring comics' greatest characters. These trade paperback editions focus on the easiest entry points DC has in its vast library, with seminal, groundbreaking tales that transcend the printed page. Start with the Essentials.

This collects GREEN LANTERN #43, BLACKEST NIGHT #0-8, and two stories from UNTOLD TALES OF THE BLACKEST NIGHT #1.
Geoff Johns is an award-winning writer and one of the most popular contemporary comic book writers today. Johns is the author of the New York Times best-selling graphic novels Aquaman: The Trench, Blackest Night, Green Lantern: The Sinestro Corps War, Justice League: Origin, Superman: Brainiac and Batman: Earth One which hit #1 on the bestseller list. He is also known for transforming Green Lantern into one of the most critically and commercially successful franchises in comics.

Johns was born in Detroit and studied media arts, screenwriting and film at Michigan State University. After moving to Los Angeles, he became an assistant to Richard Donner, director of Superman: The Movie. He and his mentor Donner later co-wrote Superman: Last Son, featuring the return of General Zod.

Johns has written for various other media, including episodes of Smallville, Arrow and Adult Swim's Robot Chicken, for which he was nominated along with his co-writers for an Emmy. He is the Chief Creative Officer of DC Entertainment and resides in Los Angeles, California.
"The talk of the comic book world." --USA Weekend