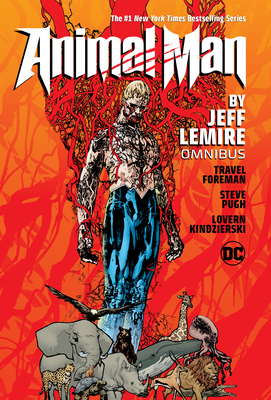 Armed with the unique power to take on the abilities of any animal, Buddy is a hero-turned-activist struggling with the challenges of being a husband and father.

When his four-year-old daughter, Maxine, suddenly starts exhibiting her own disturbing animal-based powers, Buddy begins an odyssey that will change his and his family's lives forever! In the world of Buddy Baker, nothing is ever as it seems.

Animal Man by Jeff Lemire Omnibus features the stunning artwork of Travel Foreman (Immortal Iron Fist) and Steve Pugh (Vertigo's Animal Man), along with Rafael Albuquerque (American Vampire), Timothy Green II (Annihilation: Conquest--Starlord) and more. Collects Animal Man #0-29, Animal Man Annual #1-2, and Swamp Thing #12 and #17 along with a brand-new introduction by Lemire and more than 80 pages of behind-the-scenes artwork in the making of this modern classic.
Award-winning Canadian cartoonist Jeff Lemire is the creator of the acclaimed monthly comic book series Sweet Tooth, published by DC/Vertigo, and the award-winning graphic novel Essex County, published by Top Shelf. Now one of DC Comics' cornerstone writers, Jeff was prominent in the publisher's "New 52" line-wide relaunch as the writer of Animal Man, Justice League Dark and Frankenstein: Agent of S.H.A.D.E. He has also written the monthly adventures of Superboy, The Atom and Constantine. In 2008 Jeff won the Shuster Award for Best Canadian Cartoonist and the Doug Wright Award for Best Emerging Talent. He also won the American Library Association's prestigious Alex Award, recognizing books for adults with specific teen appeal. He has also been nominated for five Eisner Awards and five Harvey Awards. In 2010 Essex County was named as one of the five Essential Canadian Novels of the Decade. He currently lives and works in Toronto with his wife and son.