Injustice: Gods Among Us Year Four - The Complete Collection (Paperback) 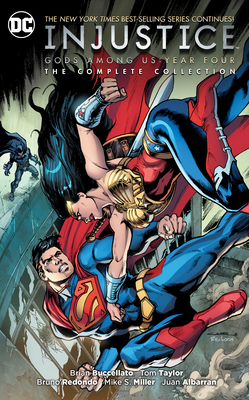 Injustice: Gods Among Us Year Four - The Complete Collection (Paperback)


Not On Our Shelves—Ships in 1-5 Days
The gods of Olympus unleashed on Earth! For four years, Superman has ruled humanity with an iron fist. His enemies have been scattered or slain, but the resistance still fights on!

After a major defeat, Batman, in one final, desperate gambit, will turn to Ares, the god of war, to enlist the Greek pantheon in his war against Superman. The Man of Steel may be strong enough to take on a god ... but what happens when his closest ally, Wonder Woman, the daughter of Zeus, is turned against him?

As action-packed as the video game phenomenon that inspired it, Injustice: Gods Among Us: Year Four: The Complete Collection tells the story of a world gone mad and the godlike men and women who seek to set it on the right track. Written by Brian Buccellato (The Flash), with a story by original series writer Tom Taylor (All-New Wolverine) and art by Bruno Redondo (Earth 2), Mike S. Miller (Batman: Arkham Unhinged) and more, this graphic novel collects the fourth year of the best-selling series in its entirety for the first time.
Brian Buccellato is a writer and and illustrator, best known for his work as scribe on The Flash with co-writer and artist Francis Manapul. He has also written Detective Comics, Injustice: Year Three and Forever Evil: Rogues Rebellion for DC Comics. As a colorist, he's worked for Marvel, DC, Vertigo, Top Cow, Image and Dynamite Entertainment. His recent coloring credits include Adventure Comics, Hellblazer, Superman and The Flash.
“A fun read.” —IGN

“Don’t pass it up, lovers of Injustice or classic super-heroes alike.” —Comicosity