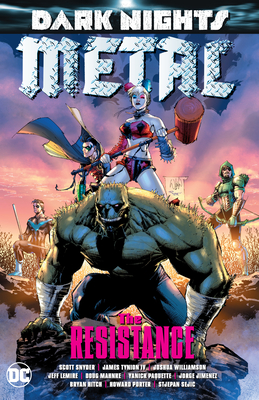 
Not On Our Shelves—Ships in 1-5 Days
The alternate, twisted versions of Batman--the Seven Dark Knights of the Dark Multiverse--are hunting the Justice League as the Leaguers attempt to locate artifacts that might protect Earth. One by one, Flash and Steel, Wonder Woman and Doctor Fate, Green Lantern and Mister Terrific, Aquaman and Deathstroke must face the Nightmare Batmen.

Elsewhere, Dick Grayson issues an S.O.S., summoning Robin, Batgirl, Harley Quinn, Killer Croc, Black Canary and Green Arrow to prevent the transformation and terraforming of Gotham City into a twisted mosaic of monsters, magic and doom. When they are trapped in a Riddler-designed maze, all hope may be lost.

And where is Batman during all this? He's trapped in his own private nightmare, reliving portions of his life while confronting Barbatos, the leader of the evil Batmen and the demon that has haunted his dreams.

Dark Nights: Metal: The Resistance Collects "Gotham Resistance" (Teen Titans #12, Nightwing #29, Suicide Squad #26, Green Arrow #32) and "Bats Out Of Hell" (The Flash #33, Justice League #32-33, Hal Jordan and The Green Lantern Corps #32), plus Batman Lost #1 and Hawkman Found #1.
Joshua Williamson lives in Portland, Oregon. His career as a comics writer kicked off in 2007, and since then he has done a number of books for Shadowline, Image, Desperado Publishing, Kick Start and DC Comics. He has written the Uncharted limited series based on the, best-selling video game, VOODOO, and Marvel's Illuminati and Red Skull. He is currently writing The Flash for DC Comics.
“Of the Metal tie-in books, this was easily the best one yet.” —IGN

“An exhilarating superhero epic… Metal embraces the grandiosity and playfulness of the past while tapping into deeper themes of family, hope, and redemption.” —A.V. Club

“A lot of greatness in one story.” —Comicosity