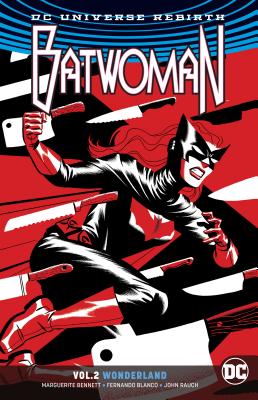 
Special Order—Subject to Availability
Batwoman is on the hunt for the deadly terrorist group called the Many Arms of Death, but little does she know that their leader, the Mother of War, is on the hunt for her. Soon Kate Kane finds herself abandoned and alone in the Sahara Desert, at the mercy of the man the Many Arms of Death calls the Needle... but his victims call the Scarecrow!

Kate's only hope for escape is to work together with her fellow prisoner: Colony Prime, her father's second-in-command and one of Kate's most bitter enemies.

Now, with both Batwoman and Colony Prime under the influence of the Scarecrow's deadly fear toxin, they'll have to fight their way through their own worst nightmares to make it out alive. Unfortunately, when someone has lived a life like Kate Kane's--one of murder, loss and betrayal--fear itself might be enough to destroy her!