Injustice: Gods Among Us Year Three: The Complete Collection (Paperback) 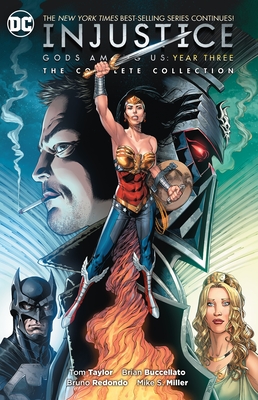 Injustice: Gods Among Us Year Three: The Complete Collection (Paperback)


Special Order—Subject to Availability
As action-packed as the video game phenomenon that inspired it, this graphic novel collects the entirety of the third year of the now-legendary Injustice: Gods Among Us saga that sees Superman and Batman rallying forces against each other!

There was a great and terrible war between heroes. On one side, Superman and his Justice League with their allies in the Sinestro Corps, who sought to bring peace through absolute order. On the other side, Batman’s army and the Green Lantern Corps. It ended with Superman, wielding a fear-powered yellow ring, murdering Black Canary while the world looked on. But Batman lived to fight another day... and Batman always has a backup plan.

Only one force in the world can hurt a Kryptonian wielding a Sinestro Corps ring—magic. Now, with John Constantine seeking his own revenge against Superman, the sorcerer con man is helping Batman add the greatest magicians in the universe to his growing army. With the most powerful magic users in the universe on their side, Superman shouldn’t stand a chance. And yet... something mysterious is protecting the Justice League. Something that wants to protect Superman’s vision of a world under his control—and something deadly enough to kill some of the most powerful beings in the universe!

Written by Tom Taylor and Brian Buccellato, this graphic novel collects the third year of the best-selling series in its entirety for the first time. Collects Injustice: Gods Among Us: Year Three #1-12 and Injustice: Gods Among Us: Year Three Annual #1.
Tom Taylor is the creator of the Aurealis-Award Winning graphic novel series The Deep (which tells the adventures of a multiethnic family of underwater explorers who live on a submarine). The Deep has been optioned by Technicolor to be turned into a 26-episode CG animated series. He is perhaps best known for the best-selling DC Comics series, Injustice: Gods Among Us, and his many Star Wars series, which include Star Wars: Invasion and Star Wars: Blood Ties (which won the 2012 Stan Lee Excelsior Award). Taylor has written for DC Comics, Dark Horse Comics, IDW Publishing, Wildstorm, 2000 AD and Gestalt Comics.
PRAISE FOR INJUSTICE: GODS AMONG US:

"Starts off with a bang." --FORBES

"An entertaining gateway into the new game universe." --IGN