Superboy and the Legion of Super-Heroes Vol. 1 (Hardcover) 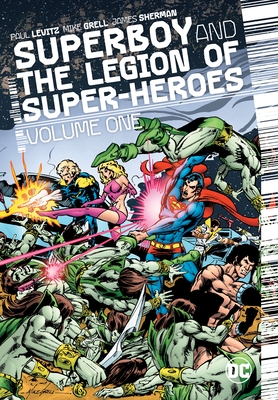 Superboy and the Legion of Super-Heroes Vol. 1 (Hardcover)

It’s the long-awaited wedding of Saturn Girl and Lightning Lad, with a ceremony bringing together Legionnaires and friends from across galaxies! But amid the celebration, one guest’s joy for the happy couple is mixed with apprehension: something is wrong with the 30th century, and only Superboy can see it. To figure out what happened to the Legion’s future, Superboy and his friends must venture a thousand years into the past—to 1978! Plus, the Legion face off against the Worldsmith, rescue their billionaire benefactor, take over Superboy’s brain and more!

Continuing directly from the LEGION OF SUPER-HEROES ARCHIVES, this volume includes stories from SUPERBOY AND THE LEGION OF SUPER-HEROES #234-240, ALL-NEW COLLECTORS’ EDITION C-55 and DC SUPER-STARS #17.
Paul Levitz entered comics in 1971 as editor of The Comic Reader, the first comics newszine, which won two Best Fanzine Comic Art Fan Awards. He has received the Inkpot Award and the Bob Clampett Humanitarian Award and serves on the Comic Book Legal Defense Fund board. Levitz is known for his writing, including an acclaimed run on the Legion of Super-Heroes, a series to which he's returned. On staff from 1973, Levitz was DC's youngest editor ever, ultimately becoming publisher in 1989 and president and publisher from 2002 to 2009.