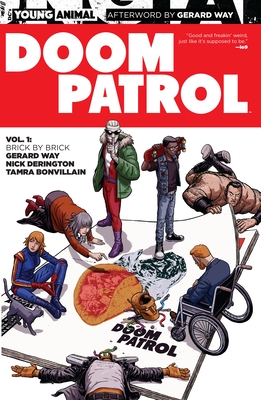 
Not On Our Shelves—Ships in 1-5 Days
The spirit of Grant Morrison's groundbreaking Doom Patrol is captured in this debut series starring the cult-favorite misfits as a part of Gerard Way's new Young Animal imprint.

This abstract and unexpected ensemble series nods at the Doom Patrol's roots by continuing to break the barriers of the traditional superhero genre. Collects issues #1-6.

Doom Patrol is the flagship title of Young Animal—a four-book grassroots mature reader imprint, creatively spearheaded by Gerard Way, bridging the gap between the DCU and Vertigo, and focusing on the juxtaposition between visual and thematic storytelling.
Gerard Way is the Eisner Award-winning writer of The Umbrella Academy and the comic mini-series The True Lives of the Fabulous Killjoys. He is the creative mind between the new grassroots imprint Young Animal, whose retro-inspired lineup bridges the gap between the DC Universe and Vertigo. Way is also widely known for his former role as the lead vocalist and co-founder of the alternative rock band My Chemical Romance.
“The bizarre superheroes, comically grotesque villains, over-the-top banter, and zany plot twists are entertaining all on their own, and readers willing to sit back and enjoy the ride won’t be disappointed.” —BOOKLIST

“As the first Young Animal title to debut, Doom Patrol set a distinct tone for the new DC Comics imprint, one driven by creative ambition and a willingness to think outside the box. “—A.V. CLUB/THE ONION

“If you have a taste for the peculiar, then DOOM PATROL by writer Gerard Way and artist Nick Derington should be on your radar.”—io9

“Writer Gerard Way and artist Nick Derington have brought back the Patrol, and have doubled down on the weirdness from the Morrison era, but with their own unique and modern spin.” —NERDIST

“This series is all about celebrating the weird, surreal side of the DCU.” —IGN

“Absolutely recommended for readers in search of something a bit off and highly experimental.”—VICE