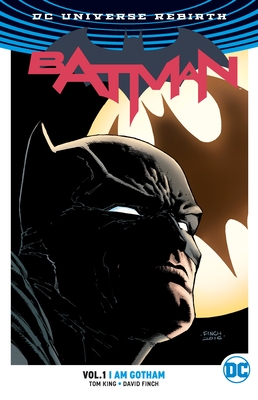 
Not On Our Shelves—Ships in 1-5 Days
Batman is Gotham City's greatest protector. But now he's not alone. There are two new heroes in town—a pair of masked metahumans with the powers of Superman and a devotion to preserving all that is good about this twisted city. Calling themselves Gotham and Gotham Girl, they’ve saved Batman’s life, fought by his side and learned from his example.

But what happens if Gotham’s new guardians go bad? What if they blame the Dark Knight for the darkness that threatens to drown their city?

When sinister forces are unleashed that can warp the minds of men and make heroes into monsters, the time will come for Batman and his allies to decide once and for all: Is Gotham a force for good…or an engine of evil?

From the blockbuster DC Universe Rebirth event comes Batman Vol. 1: I Am Gotham—the beginning of an all-new saga in the life of the Dark Knight from superstars Tom King (Grayson) and David Finch (Wonder Woman), featuring an  all-star cast of creators such as Scott Snyder (Batman: The Court Of Owls), Ivan Reis (Justice League) and Mikel Janín (Justice League Dark)! This great starting-point graphic novel collects Batman: Rebirth #1 and Batman #1-6.
Tom King is a comic book writer and novelist, best known for his work at DC Comics including Batman, Grayson and Omega Men. He often relies on his experience as an ex-CIA agent and experiences during the recent conflicts in the Middle East in his writing, especially apparent in Grayson (alongside co-writer Tim Seeley), Omega Men and in Sheriff of Babylon, published under the Vertigo imprint.
“Snyder indelibly defined the Dark Knight’s previous era, but King proves a worthy
successor as he takes over the title for DC’s wildly popular Rebirth initiative.” —Booklist

“A clean, simple gateway into the Batman franchise…” —IGN

“King sets a new stage and tone for Batman and Gotham.” —PopMatters