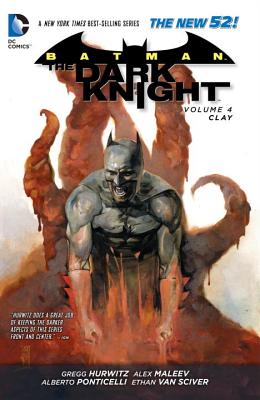 
Special Order—Subject to Availability
The shape-shifting Clayface—formerly the disgraced actor Basil Karlo—is on a rampage, and Batman must battle his way through a network of his deadliest enemies to uncover the truth. But how do you stop a killer who can be anywhere—and anyone? And soaring above Gotham is another threat in the form of the Man-Bat, whose unstable serum has made his predatory plans much more deadly!

In BATMAN - THE DARK KNIGHT: CLAY (collects issues #22-29), writer Gregg Hurwitz (DETECTIVE COMICS, Wolverine) teams with superstar artists Alex Maleev (BATMAN, Daredevil), Ethan Van Sciver (GREEN LANTERN, THE FLASH), and Alberto Ponticelli (DIAL H) for tales of Gotham City's greatest villains!
Gregg Hurwitz is the New York Times bestselling author of 12 thrillers, most recently, The Survivor (8/12). His novels have been shortlisted for numerous literary awards, graced top ten lists, and have been translated into 22 languages. He has also written comics for Marvel (Wolverine, Punisher) and DC (Batman, Penguin) and produced and written screenplays for film and television (ABC's "V", "Expulsion" spec script to Warner Bros, and many more). He recently announced that he will be developing his Tim Rackley books for TNT/Sony. Gregg resides in Los Angeles.
"This is your go-to book."—Entertainment Weekly

"Detective Comics is head-spinningly spectacular from top to bottom."—MTV Geek

"The start to something truly great."—IGN

"A perfect transition into the medium."—Complex Magazine