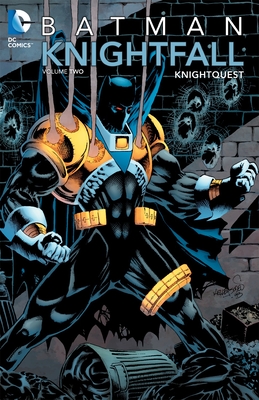 This is book number 2 in the Batman Knightfall series.

Mentally defeated and physically broken, Bruce Wayne suffered a crippling blow while battling the brutal Bane. Now, the mantle of the Bat must be passed on to another, and Jean Paul Valley answers the call! But as the new Caped Crusader slowly loses his grip on sanity, his idea of justice takes a violent and deadly turn. Witnessing this dangerous behavior firsthand, Nightwing and Robin try to come to grips with Bruce's highly controversial decision while the new Batman sets his sights on taking revenge against Bane!

This volume collects Detective Comics #667-675, Shadow of the Bat #19-20, #24-28, Batman #501-508, Catwoman #6-7 and Robin #7.
Dennis O'Neil is the influential writer of comics including Batman, Green Lantern/Green Arrow, The Justice League of America and countless other titles. He is also the author of The DC Comics Guide to Writing for Comics (Watson Guptill).

Known for his fast-paced, action-oriented plotting, Chuck Dixon is the prolific and acclaimed writer of long runs on Batman, Robin, Nightwing, Birds of Prey, Green Arrow and, for Marvel Comics, The Punisher and Conan.

Doug Moench has written novels, short stories, newspaper feature articles, weekly newspaper comic strips, film screenplays and teleplays. His first published work was My Dog Sandy, a comic strip printed in his elementary school newspaper. Moench has worked for DC Comics, Marvel Comics, Dark Horse Comics and many other smaller companies; he has written hundreds of issues of many different comics, and created dozens of characters, such as Moon Knight.