Batman: The Man Who Laughs (Paperback) 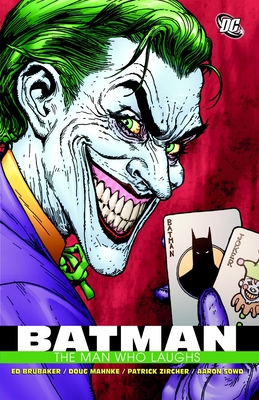 Batman: The Man Who Laughs (Paperback)


Not On Our Shelves—Ships in 1-5 Days
Witness Batman's first encounter with The Joker in this volume collecting the graphic novel Batman: The Man Who Laughs, by Ed Brubaker and Doug Mahnke! This collection also includes Detective Comics #784-786, a murder mystery tale guest-starring Green Lantern Alan Scott.
A one-time cartoonist, Ed Brubaker has been working as a writer since the early 1990s, and in that time his work has won several awards, including both the Harvey and Eisner Awards for Best Writer in 2007, and has been translated around the world. His comics credits include Batman, Catwoman, Gotham Central, and Sleeper for DC Comics and Daredevil, Captain America, and Criminal for Marvel. He lives and works in Seattle, Washington, with his wife, Melanie, and many pets.

Born in 1963 in the Year of the Rabbit, Doug Mahnke embarked on a love affair with comics at the age of five. He landed a job drawing comics for Dark Horse at the age of 24. Doug and writer John Arcudi collaborated on Dark Horse’s The Mask and their creator-owned series Major Bummer, originally published by DC. Since then Doug has worked on a wide variety of titles (including Superman: The Man Of Steel, JLA, Batman, Team Zero, Seven Soldiers: Frankenstein, Black Adam: The Dark Age and Stormwatch: P.H.D.) with such writers as Joe Kelly, Judd Winick, Chuck Dixon, Grant Morrison, Christos Gage and Ed Brubaker, just to name a few. He lives in the midwest with his wife and six kids, one dog, and a bunny named Suzie.