Cobra II: The Inside Story of the Invasion and Occupation of Iraq (Paperback) 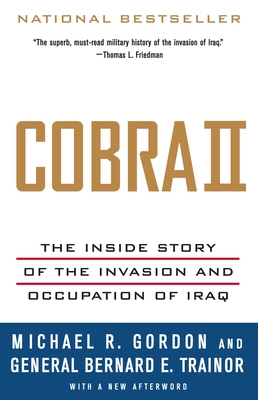 Cobra II: The Inside Story of the Invasion and Occupation of Iraq (Paperback)

Written by the chief military correspondent of the New York Times and a prominent retired Marine general, this is the definitive account of the invasion of Iraq.

A stunning work of investigative journalism, Cobra II describes in riveting detail how the American rush to Baghdad provided the opportunity for the virulent insurgency that followed. As Gordon and Trainor show, the brutal aftermath was not inevitable and was a surprise to the generals on both sides. Based on access to unseen documents and exclusive interviews with the men and women at the heart of the war, Cobra II provides firsthand accounts of the fighting on the ground and the high-level planning behind the scenes. Now with a new afterword that addresses what transpired after the fateful events of the summer of 2003, this is a peerless re-creation and analysis of the central event of our times.

Michael R. Gordon is the chief military correspondent for The New York Times, where he has worked since 1985. He is the coauthor, with Lieutenant General Bernard E. Trainor, of The Generals’ War. He has covered the Iraq War, the American intervention in Afghanistan, the Kosovo conflict, the Russian war in Chechnya, the 1991 Persian Gulf War, and the American invasion of Panama. He lives in the Washington, D.C., area.

Bernard E. Trainor, a retired Marine Corps lieutenant general, was a military correspondent for The New York Times from 1986 to 1990. He was director of the National Security Program at Harvard University’s John F. Kennedy School of Government from 1990 to 1996. Currently a military analyst for NBC, Trainor lives in Potomac Falls, Virginia.

“A work of prodigious research, Cobra II will likely become the benchmark by which other histories of the Iraq invasion are measured.”—The New York Times “Magisterial . . . With mountains of fresh detail on the war’s planning and progress with judicious analysis, Cobra II . . . will be hard to improve upon.” —The Economist“Stands as the best account of the war to dateÉoffers an instructive lesson on the consequences of inadequate strategic planning.”—The Washington Post Book World“ExcellentÉ Cobra II is everything that the Bush administration's plan for the war was not. It is meticulously organized, shuns bluff and bombast for lapidary statements, and is largely impervious to attack.”—The New York Times Book Review“RemarkableÉ a classic military history of the blow-by-blow fighting to Baghdad. Cobra II makes an irrefutable case for where the laurels lay for the victors and where the blame lies for the defeats.”—The Portland Oregonian