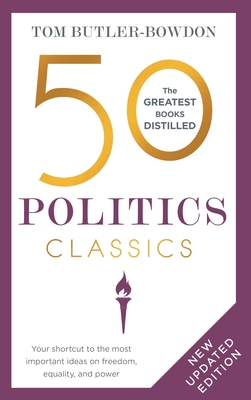 This is the thinking person's guide to the big political texts from across the centuries, from the original pioneers to the contemporary. With insightful commentary for each of the 50 books, key quotes and biographical information on the authors and a guide to further reading,50 Politics Classics gives a unique overview of the political writings that shaped history and are still shaping minds today.

From Abraham Lincoln to Nelson Mandela, and from Aristotle to George Orwell,50 Politics Classics distils the essence of the books, pamphlets, and speeches of the major leaders and great thinkers that drive real-world change. Spanning 2,500 years, left and right, thinkers and doers, Tom Butler-Bowdon covers activists, war strategists, visionary leaders, economists, philosophers of freedom, feminists, conservatives and environmentalists, right up to contemporary leaders and thought leaders such as Barack Obama, Isobel Wilkerson and Michael Pillsbury.

Whether you consider yourself to be conservative, liberal, socialist, or Marxist, this book gives you greater understanding of the key ideas that matter in our politically charged times.
Tom Butler-Bowdon is an expert on the "literature of possibility", covering self-help, motivation, spirituality, prosperity, psychology and philosophy. USA Today described him as "a true scholar of this type of literature". His first book, 50 Self-Help Classics, won the Benjamin Franklin Award and was a Foreword magazine Book of the Year.

The 50 Classics series has sold over 400,000 copies and has been published in 23 languages.

A graduate of the London School of Economics and the University of Sydney, he lives in Oxford, UK, and Australia.