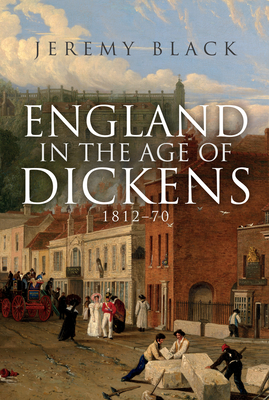 
On Our Shelves Now at:
Life, society, family, economy, and politics in early and mid-Victorian England mediated through the life and writings of arguably the nation's greatest novelist

Beginning with an overview of the age of Dickens, Professor Jeremy Black guides the reader through the biography and writings of the great man to show how his work not only expressed his experience of Victorian England, but also defined it, for his contemporaries and for generations to come. In some ways for us, Victorian England simply is Dickens' England. Professor Black considers London as the center of all but also how Dickens even succeeded in defining the countryside - to say nothing of his effect on concepts of gender and social structure. Then there is government - from the Circumlocution Office to Britain as the supreme imperial power. Dickens describes a culture - popular, middle, and élite - and at the same time creates one. It takes a historian of Professor Black's standing to differentiate between the two and show how they inter-react.
Jeremy Black is Professor of History at Exeter University. He is a prolific lecturer and writer, the author of over 100 books. Many concern aspects of eighteenth-century British, European, and American political, diplomatic, and military history but he has also published on the history of the press, cartography, warfare, culture, and on the nature and uses of history itself. He sits on the editorial boards of History Today, International History Review, Journal of Military History, and Media History.