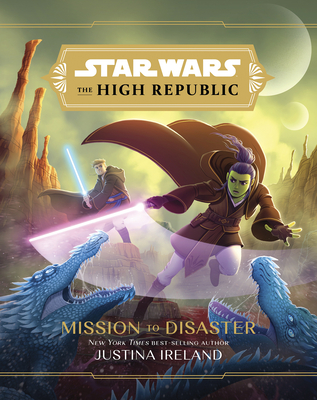 Centuries before the events of Star Wars: The Phantom Menace, in the era of the glorious High Republic, the Jedi are the guardians of peace and justice in the galaxy!


The Jedi think the dreaded Nihil marauders have been all but defeated. Their leader is on the run and their numbers have dwindled. Jedi Knight Vernestra Rwoh hopes this means she will finally have time to really train her Padawan, Imri Cantaros—but reports of a Nihil attack on Port Haileap soon dash those hopes. For not only have the Nihil attacked the peaceful outpost, they have abducted Vernestra and Imri’s friend, Avon Starros. The two Jedi set off for Port Haileap, determined to figure out where the Nihil have taken their friend. Meanwhile, Avon must put her smarts and skills to the ultimate test as she fights for survival among the Nihil—and uncovers a sinister plan. Can Vernestra and Imri find their friend before disaster strikes?

Justina Ireland enjoys dark chocolate, dark humor, and is not too proud to admit that she’s still afraid of the dark. She is the author of Dread Nation (Balzer + Bray/HarperCollins), a New York Times bestseller as well as the sequel Deathless Divide. Her earlier works include the fantasy young adult novels Vengeance Bound and Promise of Shadows (both Simon and Schuster).

Justina also writes for the Star Wars franchise, including the books Lando’s Luck, Spark of the Resistance, and the upcoming A Test of Courage, part of the High Republic publishing initiative.

She is the former co-editor in chief of FIYAH Literary Magazine of Black Speculative Fiction, for which she won a World Fantasy Award. She holds a BA from Armstrong Atlantic University and an MFA from Hamline University.
"Star Wars: The High Republic is your new Star Wars obsession."—Collider

"The High Republic has arrived and it is glorious."—Nerdist

"The High Republic is the fresh start Star Wars has been waiting for."—Cinema Blend

For A Test of Courage : "The comfort food that a Star Wars adventure ought to provide...Justina Ireland has written a book that begs to be read in one sitting."—SlashFilm

For A Test of Courage: "Rich internal third-person dialogue reveals dollops of inner turmoil for each character at key moments as well as providing some much-needed world-building to make this a winning choice. A great read for Star Wars fans young and old."—Kirkus Reviews