I Want to Sleep Under the Stars! (An Unlimited Squirrels Book) (Hardcover) 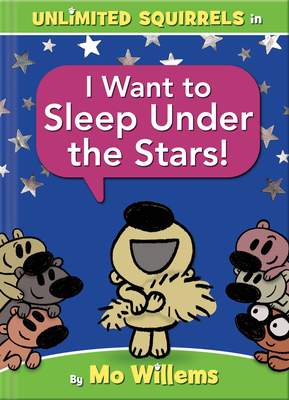 I Want to Sleep Under the Stars! (An Unlimited Squirrels Book) (Hardcover)

Mo Willems, creator of the revolutionary, award-winning, best-selling Elephant & Piggie books, has another breakout beginning-reader series. An ensemble cast of Squirrels, Acorns, and pop-in guests hosts a page-turning extravaganza. Each book features a funny, furry adventure AND bonus jokes, quirky quizzes, nutty facts, and so, so many Squirrels.

In I Want to Sleep Under the Stars, Zoom Squirrel dreams of sleeping under the night stars. The Squirrel pals are excited to help! But will their encouragement be enough—or too much? Do you know more about sleeping under the stars than the Squirrels do? You will by the end of this book!
Mo Willems, a #1 New York Times best-selling author and illustrator, has been awarded three Caldecott Honors for his picture books and two Theodor Seuss Geisel Medals and five Geisel Honors for his celebrated Elephant & Piggie series. Mo is the inaugural Education Artist-in-Residence at the John F. Kennedy Center for the Performing Arts. He began his career as a writer and animator on Sesame Street , where he garnered six Emmy Awards. He lives in Massachusetts with his family. Learn more at pigeonpresents.com.
PRAISE FOR WHO IS THE MYSTERY READER?

"Willems' cartoony characters are as goofy and appealing as ever . . . The clueless squirrels fail to uncover the mystery readers' identities, but beginning readers will certainly puzzle this out as they are enjoying comic conventions (speech bubbles, panels, varied font sizes, etc.) and frequent metafictive asides. Smart, sassy, and laugh-out-loud fun; Willems remains at the top of his game."—Booklist