Instructions Not Included: How a Team of Women Coded the Future (Hardcover) 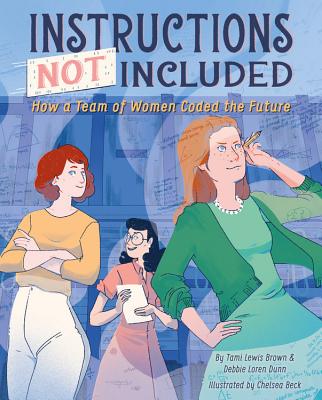 Instructions Not Included: How a Team of Women Coded the Future (Hardcover)


Not On Our Shelves—Ships in 1-5 Days
Click. Whir. Buzz.
Not so long ago, math problems had to be solved with pencil and paper, mail delivered by postman, and files were stored in paper folders and metal cabinets. But three women, Betty Snyder, Jean Jennings, and Kay McNulty knew there could be a better way. During World War II, people hoped ENIAC (Electronic Numerical Integrator and Computer), one of the earliest computers, could help with the war effort. With little guidance, no instructions, and barely any access to the machine itself, Betty, Jean, and Kay used mathematics, electrical engineering, logic, and common sense to command a computer as large as a room and create the modern world. The machine was like Betty, requiring outside-the-box thinking, like Jean, persistent and consistent, and like Kay, no mistakes, every answer perfect. Today computers are all around us, performing every conceivable task, thanks, in large part, to Betty, Jean, and Kay's pioneering work. Instructions Not Included is their story.
This fascinating chapter in history is brought to life with vivid prose by Tami Lewis Brown and Debbie Loren Dunn and with striking illustrations by Chelsea Beck. Detailed back matter including historical photos provides a closer look.
Tami Lewis Brown is a former lawyer and elementary school librarian. She holds an MFA in Writing for Children & Young Adults from Vermont College of Fine Arts where she has served on the Board of Trustees for over ten years. Her books include two other picturebook biographies, Art Is Life and Soar, Elinor!, which was a 2011 Top Ten Amelia Bloomer Project selection and Junior Library Guild Selection. She lives with her family in Washington, DC.
Debbie Loren Dunn graduated from the University of Texas at Austin with a degree in Computer Science and worked in the computer industry for 20 years, specializing in databases and data mining. She holds an MFA in Writing for Children & Young Adults from Vermont College of Fine Arts where she serves on the Board of Trustees. Also, she is a current Board Member of the Austin Crohn's and Colitis Foundation, a former Regional Advisor for SCBWI Austin and a former Board Member for The Writers' League of Texas. She lives in Austin, Texas with her family.
You can visit Tami and Debbie online at their website www.brownanddunn.com.

Chelsea Beck (chelseadrewthis.com) is an illustrator based in a sunny little apartment in Brooklyn, New York. She currently works for Gizmodo Media Group and has created illustrations for clients including the New York Times, the Washington Post, NPR, the Atlantic, and some of the coolest musical acts all over the USA. Instructions Not Included is the first book she has illustrated.