Six Words Fresh Off the Boat: Stories of Immigration, Identity, and Coming to America (ABC) (Hardcover) 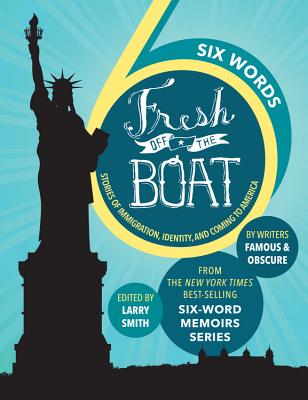 Six Words Fresh Off the Boat: Stories of Immigration, Identity, and Coming to America (ABC) (Hardcover)


Special Order—Subject to Availability
Six Words Fresh Off the Boat marries the phenomenon of Larry Smith's successful Six-Word Memoirs with ABC and 20th Century Fox Television's hit comedy Fresh Off the Boat. The book captures hundreds of takes on the immigration experience, from every-day people as well as world-famous celebrities including Aziz Ansari, Chimamanda Ngozi Adichie, Julianne Moore, Mario Batali, George Takei, Neil Gaiman, Amanda Palmer, Billy Collins, Junot Díaz, and Dr. Sanjay Gupta. This book will have you thinking in sixes and challenging others to share six words about their lives.
Larry Smith is the creator of the Six-Word Memoir project, a best-selling series of eight books and an inspirational phenomenon. Smith is a frequent speaker on his innovative form of storytelling at conferences such as TEDx and companies such as Google and Twitter, as well as non-profits, foundations, and schools across the country. Larry has been a writer and editor at Men's Journal and ESPN Magazine. He has written for The New York Times, Los Angeles Times, Wired and SPIN. He lives in Columbus, Ohio and Brooklyn, New York with his wife.