Hegel on Pseudo-Philosophy: Reading the Preface to the Phenomenology of Spirit (Hardcover) 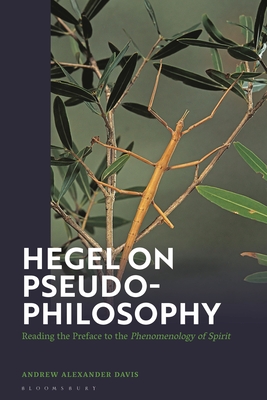 Hegel on Pseudo-Philosophy: Reading the Preface to the Phenomenology of Spirit (Hardcover)

The preface to the Phenomenology of Spirit (1807) is one of the most widely-read texts in Hegel's corpus, and yet we still lack a clear understanding of its aims. Providing a fresh perspective on Hegel's preface, Andrew Davis contends that it should be read as an overview of what philosophy is not.

Contesting previous investigations that have assumed Hegel's purpose in the preface is to introduce the reader to his own philosophical method, Davis moves Hegel's positive comments about the nature of philosophy to the background. This is, after all, where they belong in a preface, according to Hegelian philosophy, as Hegel contends that the actual nature of philosophy cannot be presented in advance of specific inquiries. Examining the nature of philosophy through negation, each chapter in the book explores a different form of pseudo-philosophy that Hegel addresses in his preface. Together, they allow Hegelian philosophy to appear in relief as precisely what cannot be achieved through explanation, edification, formalism, phenomenology, mathematical proof, propositional truth, or personal revelation. With an appendix featuring synopses of every paragraph of the preface, Hegel on Pseudo-Philosophy not only offers a jargon-free introduction to Hegel's thought, but it also yields crucial insights into the organisation of a preface that has long been decried as haphazard or incomprehensible.