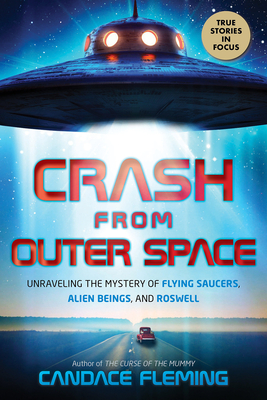 Award-winning author Candace Fleming sets her gaze on the mystery at Roswell, New Mexico, and the "crash from outer space" that set the United States on edge for decades.

In 1947, during the early years of the Cold War, a field in Roswell, New Mexico was disturbed by a strange crash and smattering of debris. Some say the bodies of extraterrestrial beings were strewn across the ground, that a UFO had crashed there, and that the government was covering up the evidence in a massive conspiracy.

But what really happened at Roswell?

The infamous "crash from outer space" has become a fixture in our culture, inspiring a surge of UFO sightings and conspiracy theories. But at its heart is the story of military scientists, a city on the brink of the Cold War, and a debris field scattered with mystery. What was it that actually crashed at Roswell? Were alien bodies found? Was it Russian spies? Secret military technology? And did the government try to hide what they found?

An electrifying exploration of one of the most thrilling mysteries in recent history, by Sibert Award winning author Candace Fleming.

Candace Fleming is the versatile and acclaimed author of more than twenty books for children and young adults, including The Curse of the Mummy: Uncovering Tutankhamun’s Tomb; The Rise and Fall of Charles Lindbergh, winner of the YALSA Excellence in Nonfiction for Young Adults Award; the Sibert Award winner Honeybee: The Busy Life of Apis Mellifera; the Los Angeles Times Book Prize winner and Sibert Honor Book The Family Romanov: Murder, Rebellion, and the Fall of the Russian Empire; and the critically acclaimed Amelia Lost: The Life and Disappearance of Amelia Earhart.

Praise for Crash from Outer Space: Unraveling the Mystery of Flying Saucers, Alien Beings, and Roswell:

* "An exhilarating read, a useful classroom resource, and ultimately an illuminating look at human nature and the modern fascination with UFOs." -- Booklist, starred review

Praise for The Curse of the Mummy:

* "In Fleming's capable hands, the story of the boy king and Howard Carter's discovery of his tomb brims with enthusiasm, wonder, and mystique." -- Booklist, starred review

"The Curse of the Mummy...will draw children's interest with a sense of lurid promise and keep them reading..." -- Wall Street Journal

Praise for The Family Romanov: Murder, Rebellion, and the Fall of Imperial Russia:

Winner of the Boston Globe-Horn Book Award for Nonfiction

Winner of the Orbis Pictus Award for Outstanding Nonfiction

* "A wonderful introduction to this era in Russian history and a great read for those already familiar with it." -- Publishers Weekly, starred review

* "For readers who regard history as dull, Fleming's extraordinary book is proof positive that, on the contrary, it is endlessly fascinating, absorbing as any novel, and the stuff of an altogether memorable reading experience." -- Booklist, starred review

* "Fleming has outdone herself with this riveting work of narrative nonfiction that appeals to the imagination as much as the intellect." -- The Horn Book, starred review

* "This is both a sobering work, and the account of the discovery of their bones and the aftermath is at once fascinating and distressing. A solid resource and good recreational reading for high school students." -- School Library Journal, starred review

* "With comprehensive source notes and bibliographies of print and online materials, this will be a boon to student researchers, but it's also a heartbreaking page-turner for YAs who prefer their nonfiction to read like a novel." -- The Bulletin of the Center for Children's Books, starred review

Praise for Amelia Lost: The Life and Disappearance of Amelia Earhart:

* "The book's structure and scope, along with the story's inherent drama, provide a taut, cinematic backdrop for the history of Earhart's doomed flight." -- The Horn Book Magazine, starred review

* "Ho-hum history? Not in Fleming's apt hands. What could be a dry recitation of facts and dates is instead a gripping and suspenseful thriller... This book is splendid. Hand it to everyone." -- School Library Journal, starred review

* "Fleming cleverly structures this biography to give the tale of tragedy a fresh and dreadful impact... As a result, this offers not only a provocative introduction to Earhart but also compelling glimpse of what it was like to watch her disappear from the world." -- The Bulletin of the Center for Children's Books, starred review