That Girl Lay Lay: It's Time to #Slay (Paperback) 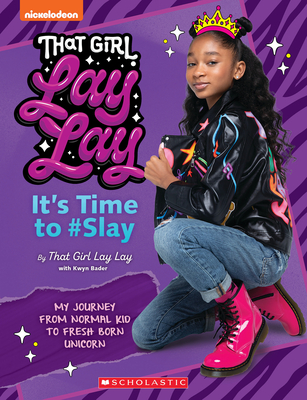 That Girl Lay Lay: It's Time to #Slay (Paperback)


Not On Our Shelves—Ships in 1-5 Days
Learn all about Lay Lay -- the latest teen music sensation and Nickelodeon’s newest star -- in this full-color photographic memoir!

Alaya “Lay Lay” High is the latest teen influencer and role model to take over social media. She’s a rapper, dancer, style icon, yoga lover, and gardener. In 2018, at only eleven years old, she was the youngest female rapper ever to be signed with Empire Records. Now, her fans include such followers as Cardi B, Le’Veon Bell, and North West -- and she’s soon to have her own show on Nickelodeon!

Lay Lay has already amazed the world with her style, enthusiasm, and positive lyrics. And now she’ll amaze kids everywhere with her journey, from going viral after rapping in her dad’s car to becoming a superstar, in this photographic memoir!

Find out all about Lay Lay and her incredible success -- including her words of inspiration, never-before-heard stories about growing up with her dad and siblings in Atlanta, how she got into gardening and yoga, her goals for the future, and her tips on how you can become confident and learn how to slay, just like Lay Lay!

With exclusive content and full-color photos on every page, this biographic scrapbook is a must-have for any Lay Lay fan!

Alaya “That Girl Lay Lay” High is a social media star and hip-hop prodigy who has taken the world by storm with her infectious energy and sharp rhymes. She has been writing, producing, rapping, and singing since the age of five, and at age eleven became the youngest female rapper to sign a recording deal and create her own imprint, Fresh Rebel Muzik/EMPIRE. Her music videos, including smash hits like “Mama” and “Supersize XL,” garner millions of views online. She is also the star of the Nickelodeon series That Girl Lay Lay, which debuted on the network in 2021.

Kwyn Bader is a multiple award-winning filmmaker, screenwriter, and author whose work explores history, race, music, and culture from the unique vantage point of his bi-racial background and multi-cultural upbringing. He is the writer and director of the SXSW Film Festival Winner for Best Feature Film, Loving Jezebel. He has also written the Emmy-nominated PBS documentary Birth of a Movement; the documentary film Tuskegee Airmen: American Heroes; and features and TV screenplays for various Hollywood studios.

Kwyn is also a successful creative executive who serves as the Senior Global Director of Creative Strategy for ViacomCBS Consumer Products, helping translate shows and movies from iconic brands Nickelodeon, Comedy Central, and Paramount into products sold all over the world.