The Boy Who Failed Show and Tell (Paperback) 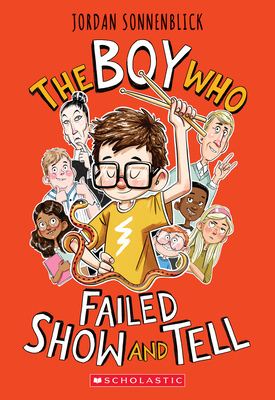 The Boy Who Failed Show and Tell (Paperback)


Not On Our Shelves—Ships in 1-5 Days
An unbelievably hilarious middle-grade true story from bestselling author Jordan Sonnenblick.

In a typical school year, every kid has one or two things go wrong. But for Jordan, there's A LOT going wrong ALL THE TIME.

Take this year. Here are some of the things going wrong:

-- He has a slight breathing problem because of his asthma. And breathing is never really an optional activity.

-- His pet snake has given birth to way, way, way too many baby snakes, all who need a home.

-- He is finding that becoming The World's Best Drummer in no time whatsoever is maybe not the easiest goal.

-- There are bullies ready to stomp him when all he has to defend himself with is a lunchbox.

And all this doesn't even include the freak swing set accident, the fears inside his head, or the funniest class presentation ever.

By keeping his cool (some of the time), banging on the drums (a lot), and keeping his sense of humor (all the time), Jordan's going to try to make it through the year and grow up to write a book about it!

Jordan Sonnenblick is the author of the acclaimed Drums, Girls & Dangerous Pie, After Ever After, Notes from the Midnight Driver, Zen and the Art of Faking It, Falling Over Sideways, and The Secret Sheriff of Sixth Grade. He lives in Bethlehem, Pennsylvania, with his wife and two children.

Praise for The Secret Sheriff of Sixth Grade:

"Sonnenblick creates in Maverick an endearing protagonist to root for. Despite daunting obstacles, this terrific boy retains a strong sense of self, a sense of humor, and a big heart that impels him to do what's right." -- Kirkus Reviews

"[A] winning formula a child in crisis, lots of humorous situations and one-liners, and moments of genuine warmth and emotion." -- Horn Book

Praise for Falling Over Sideways:

* "Sonnenblick has a knack for smart, droll, first-person narration The book's beginning sounds so much like other, sunnier novels that readers, like Claire, will feel a jolt when the first crisis comes. But they'll stay with her every step of the way." -- Booklist, starred review

* "With humor, grace, and an ear for middle school nuance, Sonnenblick navigates the tricky waters of eighth grade and manages to convey the heartbreak of a major tragedy alongside the more mundane, but no less horrifying, problems Authentic, funny, dramatic, fantastic." -- Kirkus Reviews, starred review

* "It's a powerful and profound look at a family coping with unexpected change." -- Publishers Weekly, starred review

"A brave book Jordan Sonnenblick carries it off with such charm and elan, you forget for a moment your heart is breaking." -- Frank McCourt, author of Angela's Ashes

* "Sonnenblick shows that even in the midst of tragedy, life goes on, love can flower, and the one thing you can always change is yourself." -- Booklist, starred review

"The reader falls in love with the brothers, laughing and crying by turns and rooting for both of them until it almost hurts." -- Kirkus Reviews

Praise for After Ever After:

* "As hilarious as it is tragic, and as honest as it is hopeful, don't confuse this book with inspirational reading. It's irresistible reading." -- Booklist, starred review

"Told with Sonnenblick's trademark self-deprecating humor, this stand-alone tween narrative slots neatly into the space between the author's YA and J titles, sensitively dealing with issues of family, friendship and death in a way that will appeal to middle-grade students. Recommended for fans and new readers alike." -- Kirkus Reviews