Up on Bob (Hardcover) 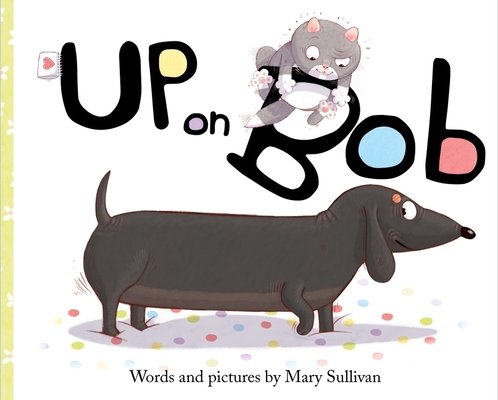 Up on Bob (Hardcover)


Not On Our Shelves—Ships in 1-5 Days
★ "Perfect pacing builds suspense and adds to the hilarity." —Booklist, STARRED Review

Bob the dog doesn’t mind hard work when it means he can reward himself with a nap. But Someone is watching him sleep! Hopefully they will just go away if Bob lies really still. But Someone, who happens to be a cat, has other things in mind.

Up on Bob is a humorous tale about sharing, working hard—and sleeping even harder. With irresistibly sly illustrations and pitch perfect pet dynamics, Geisel Honor–winning author-illustrator Mary Sullivan tells a sweet tale of friendship with a fresh new spin on the age-old cat-and-dog rivalry.

Mary Sullivan spent a great deal of time drawing in her formative years. Though she received a BFA from the University of Texas at Austin, she considers herself a self-trained illustrator. Ms. Sullivan has shown her work at galleries and coffees shops in Dallas and Austin. She channels her considerable creative energy  into projects for Highlights for Children, Scholastic, Innovative Kids, School Zone, Oxford Press U.K., Pearson and many more. Her first picture book for HMH, Ball, was a 2014 Geisel Honor Book. She lives in Cedar Park, Texas.
www.marysullivan.com
Twitter: @sullivandraws
Instagram: @sullivandraws

? "Perfect pacing builds suspense and adds to the hilarity, with most of the storytelling relayed through Bob’s shifting expressions. Sullivan has an uncanny ability to capture the details of animal behavior, injecting humanity through facial expressions." —Booklist, STARRED Review   ? "Sullivanagain displays her gift for concise animal comedy...light-hearted and spring-toned...Kids just puzzling out words will appreciate the comfortable format and cozily funny story."—The Bulletin of the Center for Children's Books, STARRED review   "Both Bob and Someone the cat have irresistible expressions, with their huge eyes conveying emotion on every page. This funny story will have wide appeal....A clever twist on traditional dog-versus-cat animosity, with subtle overtones of sharing and tolerance." —Kirkus —