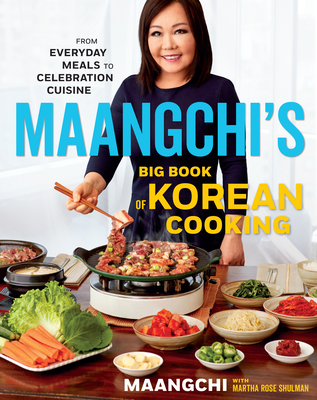 Despite the huge popularity of Korean restaurants, there has been no comprehensive book on Korean cooking—until now. Maangchi’s Big Book of Korean Cooking is a wide, deep journey to the heart of a food-obsessed culture.

The book contains the favorite dishes Maangchi has perfected over the years, from Korean barbecue and fried chicken to bulgogi and bibimbap. It explores topics not covered in other Korean cookbooks, from the vegan fare of Buddhist mountain temples to the inventive snacks of street vendors to the healthful, beautiful lunch boxes Korean mothers make for their kids. Maangchi has updated and improved the traditional dishes, without losing their authentic spirit.
Among the features:
• Spectacular party food, from homemade clear rice liquor to sweet, spicy, sour baby back ribs
• Side plates that support and complement every Korean meal
• Soups, hotpots, and stews, from bone broth to tofu stews
• An array of different kimchis
• A detailed photographic chapter on Korean cooking techniques

Hundreds of striking, full-color photos by Maangchi show Korean ingredients so the cook knows exactly what to buy, step-by-step techniques for each recipe, and tempting close-ups of every dish.

MAANGCHI ("Hammer" in Korean) was born and raised in South Korea, where she learned the fundamentals of home cooking from her relatives. A former counselor for victims of domestic violence and movie extra, she is the founder-owner of maangchi.com, the top online destination for Korean cooking. She also has her own YouTube channel. She lives in New York City.

Martha Rose Shulman writes the popular recipe feature entitled “Recipes for Health” for the New York Times Food section and is the award-winning author of more than twenty-five cookbooks, including The Simple Art of Vegetarian Cooking,The Very Best of Recipes for Health, Mediterranean Harvest: Vegetarian Recipes from the World’s Healthiest Cuisine (named one of the six best vegetarian cookbooks of the last twenty-five years by Cooking Light), Mediterranean Light, Provençal Light, and Entertaining Light. Her food combines pleasure and health, drawing largely from the cuisines of the Mediterranean, inherently healthy cuisines with big flavors.
Martha also works as a writing collaborator with chefs. She has coauthored two James Beard Award–winning cookbooks, The Secrets of Baking with pastry chef Sherry Yard and The Art of French Pastry with Jacquy Pfeiffer. She has also coauthored books with Wolfgang Puck, Dean Ornish, Mark Peel, Pati Jinich, and the Culinary Institute of America.

"Maangchi’s Big Book of Korean Cooking: From Everyday Meals to Celebration Cuisine is her second book, an even more comprehensive take on Korean home cooking than the first — think Julia Child’s iconic Mastering the Art of French Cooking, but with bibimbap."  —Eater   "Reading Maangchi’s Big Book of Korean Cooking is like being on a WhatsApp chain with my friends’ moms. There are photos of ingredients to buy (Sempio soy sauce, tubes of soft tofu) and recipes that go beyond KBBQ (chicken ginseng soup, Korean temple–style vegetables), all in the same tone that makes Maangchi feel like everyone’s auntie."  —Elyse Inamine, digital restaurant editor, for Bon Appetit    —