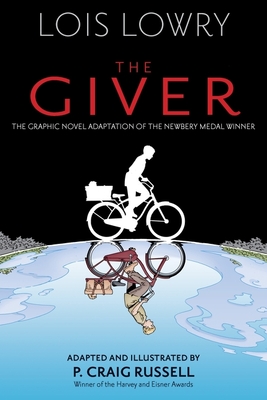 This is book number 1 in the Giver Quartet series.

The Giver is a modern classic and one of the most influential books of our time.

Placed on countless reading lists, translated into more than forty languages, and made into a feature film, The Giver is the first book in the Giver Quartet, which also includes Gathering Blue, Messenger, and Son.

In this new graphic novel edition, readers experience the haunting story of twelve-year-old Jonas and his seemingly ideal, if colorless, world of conformity and contentment through the brilliant art of P. Craig Russell that truly brings The Giver to life.

Witness Jonas’s assignment as the Receiver of Memory, watch as he begins to understand the dark secrets behind his fragile community, and follow the explosion of color into his world like never before.

Lois Lowry is the author of more than forty books for children and young adults, including the New York Times bestselling Giver Quartet and popular Anastasia Krupnik series. She has received countless honors, among them the Boston Globe-Horn Book Award, the Dorothy Canfield Fisher Award, the California Young Reader’s Medal, and the Mark Twain Award. She received Newbery Medals for two of her novels, Number the Stars and The Giver.

P. Craig Russell is a renowned artist in the field of comics and graphic novels. He has worked on many projects, including the graphic novel adaptations of Neil Gaiman’s The Sandman: The Dream Hunters, Coraline, Murder Mysteries and American Gods.
www.artofpcraigrussell.com

"A first-rate visual reframing: sensitive, artistically brilliant, and as charged as its enigmatic predecessor with profound challenges to mind and heart." –Kirkus, STARRED review   "This striking retelling of the modern classic blends words and images to create a brilliant new representation of Lowry’s dystopian conflict....This stunning work will introduce The Giver to a brand-new audience and will also delight longtime fans." –School Library Journal, STARRED review   "Russell masterfully preserves the flow of story....The relief and sometimes shock of these colors allow the power of the memories to reach readers in a way beyond mere sight, and thus the wonder of Lowry’s story is made palpable in a startling new way." –Booklist   "An accessible version of the story for readers who have not yet encountered it." –Publishers Weekly   "This beautifully illustrated graphic novel...gives new life to a true classic." –School Library Connection —