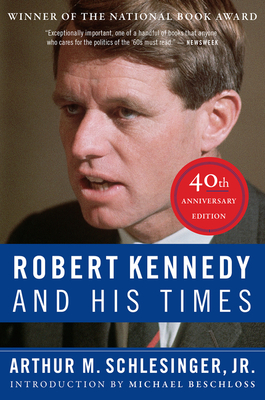 “An absorbing and vividly written study of a gallant and tragic man.”—Boston Globe

Arthur M. Schlesinger, Jr., chronicles the short life of the Kennedy family’s second presidential hopeful in “a story that leaves the reader aching for what cannot be recaptured” (Miami Herald). Schlesinger’s account vividly recalls the forces that shaped Robert Kennedy, from his position as the third son of a powerful Irish Catholic political clan to his concern for issues of social justice in the turbulent 1960s. Robert Kennedy and His Times is “a picture of a deeply compassionate man hiding his vulnerability, drawn to the underdogs and the unfortunates in society by his life experiences and sufferings” (Los Angeles Times).

This Fortieth Anniversary Edition contains not only Schlesinger’s illuminating and inspiring portrait of Robert Kennedy, but a new introduction by Michael Beschloss, in which the acclaimed best-selling author and historian discusses the book’s initial reception, Schlesinger’s thoughts on it, and expounds on why Robert Kennedy is still such an important figure today.

“An inspiring account of what it was like to be at Robert Kennedy’s side and why he and many like him felt that vision and virtue walked with them.”—Business Week

ARTHUR M. SCHLESINGER, JR., the author of sixteen books, was a renowned historian and social critic. He twice won the Pulitzer Prize, in 1946 for The Age of Jackson and in 1966 for A Thousand Days. He was also the winner of the National Book Award for both A Thousand Days and Robert Kennedy and His Times (1979). In 1998 he was awarded the prestigious National Humanities Medal.