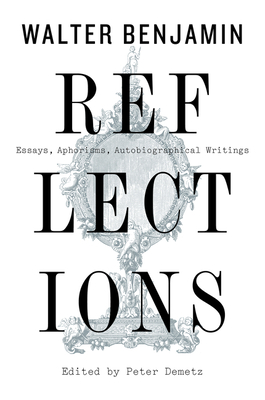 
In Stock—Click for Locations
“This book is just that: reflections of a highly polished mind that uncannily approximate the century’s fragments of shattered traditions.” — Time

A companion volume to Illuminations, the first collection of Walter Benjamin’s writings, Reflections presents a further sampling of his wide-ranging work. Here Benjamin evolves a theory of language as the medium of all creation, discusses theater and surrealism, reminisces about Berlin in the 1920s, recalls conversations with Bertolt Brecht, and provides travelogues of various cities, including Moscow under Stalin.
Benjamin moves seamlessly from literary criticism to autobiography to philosophical-theological speculations, cementing his reputation as one of the greatest and most versatile writers of the twentieth century.

WALTER BENJAMIN (1892–1940) was a German-Jewish Marxist literary critic, essayist, translator, and philosopher. He was at times associated with the Frankfurt School of critical theory and was also greatly inspired by the Marxism of Bertolt Brecht and Jewish mysticism as presented by Gershom Scholem.