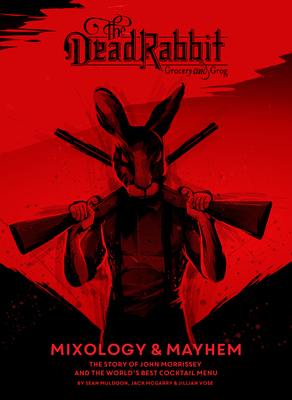 
On Our Shelves Now at:
A groundbreaking graphic novel-style cocktail book from world-renowned bar The Dead Rabbit in New York City

The Dead Rabbit Grocery & Grog in lower Manhattan has won every cocktail award there is to win, including being named "Best Bar in the World" in 2016. Since their award-winning cocktail book The Dead Rabbit Drinks Manual was published in 2015, founders Sean Muldoon and Jack McGarry, along with bar manager Jillian Vose, have completely revamped the bar's menus in a bold, graphic novel style, now featured in their newest collection The Dead Rabbit Mixology & Mayhem. Based on "Gangs of New York"-era tales retold with modern personalities from the bar world (including the authors) portrayed as the heroes and villains of the story, the menus are highly sought-after works of art. This stunning new book, featuring 90 cocktail recipes, fleshes out the tall tales even further in a collectible hardcover edition—making it a must-have for the bar's passionate fans who line up every night of the week.

JILLIAN VOSE is the beverage director at The Dead Rabbit in Lower Manhattan. She was named one of the 10 Best American Bartenders 2017 in the Spirited Awards at Tales of The Cocktail.

"In this excellent and unique cocktail book, Muldoon and McGarry, founders of New York City’s Dead Rabbit lounge (along with Vose, their bar manager), offer the establishment’s complete menu—a six-part, serialized graphic novel, with an additional 100 intricate craft cocktails. The darkly drawn protagonist, known as the Rabbit, is a “hybrid man-rabbit anti-hero” with a sinewy human torso and scary bunny head. Channeling John Morrissey, the leader of the 1850s Irish gang, the Dead Rabbits, but lurking in the shadows of Hell’s Kitchen, circa 1978, he drinks, gambles, and settles scores with a ruthless vengeance… [a] one-of-a-kind collection." —Publishers Weekly   “The Dead Rabbit doesn’t do drinks lists, it builds worlds in which its cocktails exist. With Mixology & Mayhem, the team kicks open the doors to its creative process—and lets us travel deep into its award-winning comic book menus. Cocktail books have never been this fun, this daring or this outrageous. But then, this is far more than a cocktail book. Mixology & Mayhem is a Dead Rabbit cocktail book.” —Hamish Smith, Deputy Editor of Drinks International, Editor of CLASS magazine     “Yes, this is a book with cocktail recipes. But no way is it simply a cocktail recipe book. With its insights into the background of the bar, invaluable tips on how to create a cocktail menu and specs for some of the most popular drinks from their multi-award-winning menus, it’s a must-have for every bartender. Like everything this crew turn their hands to, it’s ballsy, no-nonsense—and absolutely awesome.” —Sandrae Lawrence and Gary Sharpen, The Cocktail Lovers     “The last decade has seen cocktail books published by some of the most talented figures in the bar world. Many of these books contain excellent recipes. But Mixology & Mayhem goes far beyond excellent recipes. As you read this book, you'll quickly see that the team spends as much time (if not more) investigating and evolving the menu concept as creating their world-class drinks. Painstaking research, ridiculous levels of hard work and extreme amounts of talent are the reason these menus and the bar itself have deservedly won so many awards. The Dead Rabbit is the most perfectly realized bar concept since Trader Vic’s, and there’s something valuable in this book for everyone in our industry to learn.” —Nick Strangeway, Global Cocktail Authority —