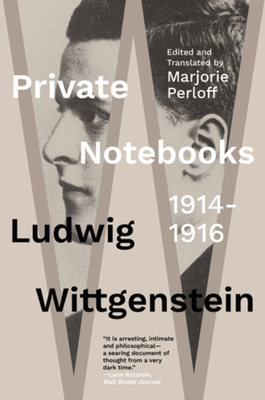 Literary Hub • Most Anticipated Books of 2022

Written in code under constant threat of battle, Wittgenstein’s searing and illuminating diaries finally emerge in this first-ever English translation.

During the pandemic, Marjorie Perloff, one of our foremost scholars of global literature, found her mind ineluctably drawn to the profound commentary on life and death in the wartime diaries of eminent philosopher Ludwig Wittgenstein (1889–1951). Upon learning that these notebooks, which richly contextualize the early stages of his magnum opus, the Tractatus-Logico-Philosophicus, had never before been published in English, the Viennese-born Perloff determinedly set about translating them. Beginning with the anxious summer of 1914, this historic, en-face edition presents the first-person recollections of a foot soldier in the Austrian Army, fresh from his days as a philosophy student at Cambridge, who must grapple with the hazing of his fellow soldiers, the stirrings of a forbidden sexuality, and the formation of an explosive analytical philosophy that seemed to draw meaning from his endless brushes with death. Much like Tolstoy’s The Gospel in Brief, Private Notebooks takes us on a personal journey to discovery as it augments our knowledge of Wittgenstein himself.

Marjorie Perloff is the Sadie Dernham Patek Professor Emerita of Humanities at Stanford University. A frequent contributor to the Times Literary Supplement, she is the author of sixteen books, including Wittgenstein’s Ladder and The Vienna Paradox.
Wittgenstein’s surviving notebooks from the first half of the First World War, now available in the first facing-page English translation, contain remarks that are clearly an embryonic form of the 'Tractatus,' along with personal remarks on religion, masturbation, and the quotidian business of being at war. Taken out of context, Wittgenstein’s philosophical remarks can seem perilously close to kitsch, or mere displays of cleverness. But he possessed a virtue rarer than cleverness: that of depth. He rarely doubted his authority to tell people how to live, and, even now, seven decades after his death, his conduct and character continue to invite lively speculation.
— New Yorker, "Best Books of 2022"

Why has it taken so long for there to be a widely available edition? Answering this question involves delving into the motivations of a large and colorful cast of characters, and Perloff’s afterword provides a helpfully succinct summary of the deliberations.... The Wittgenstein of these notebooks hints at an earthier sexuality.... On the vexed subject of his sexuality, the journal entries only deepen the mystery.... As Perloff wisely declares, 'The translator of the Private Notebooks, finally, has to respect Wittgenstein’s own silences.'

Private Notebooks: 1914-1916 is a strange and intriguing record — illuminating when it comes to Wittgenstein’s preoccupations, his sexual anguish, his continuous struggles with his ‘work’ in philosophy, along with his intermittent comments about his ‘job’ in the military... The war meant that Wittgenstein — and therefore his philosophizing — had changed... This transformation comes across as bewildering and almost unbearably moving. The notebooks show the circumstances in which Wittgenstein’s mystical turn toward the end of the ‘Tractatus’ was born — not in an attempt to escape that world, but in a determination to immerse himself in it.

Thanks to Perloff, we can now relate the public notes to Wittgenstein’s private remarks. The interest is not merely voyeuristic: it is emotional and intellectual. As the notes progress, Perloff sees a growing correspondence between public and private. She allows us to glimpse the convergence by quoting selections from Wittgenstein’s uncoded remarks.... These passages are riveting.
— Kieran Setiya - Boston Review

Perloff has done a consummate job of revealing the humanity of this enigmatic figure. This crisp translation acquaints us with a conflicted young man struggling to understand himself and his world . . . These notebooks will be an invaluable resource for understanding Wittgenstein's Tractatus Logico-Philosophicus . . . Perloff’s introduction and editor’s notes are fervent and instructive.