The Great Nowitzki: Basketball and the Meaning of Life (Hardcover) 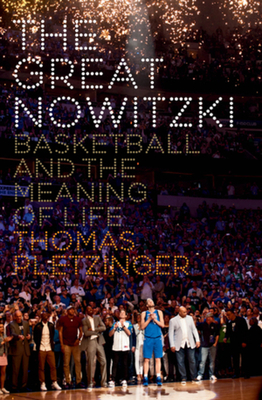 The Great Nowitzki: Basketball and the Meaning of Life (Hardcover)

A journey into the mindset of a historic basketball superstar, and the importance of his landmark career.

The seven-foot Dirk Nowitzki is one of the greatest players in basketball history. The Dallas Maverick’s legend revolutionized the sport, redefining the role of the big man in the modern game. Dirk moved differently: flexible and fast, confident and in control. He thought differently, too. On the court, his shots were masterful—none more venerated than his signature one-legged flamingo fadeaway, a move that lives on in the repertoire of today’s most skilled NBA players.

How did this lanky kid from the German suburbs become an all-time top ten scorer and NBA champion? How can a superstar stay so humble? Award-winning novelist and sportswriter Thomas Pletzinger spent over seven years traveling with Nowitzki. He witnessed Dirk’s summer workouts, involving fingertip pushups and the study of the physics, and spent days discussing literature and philosophy with Holger Geschwindner, Dirk’s enigmatic mentor and coach. Watching Nowitzki in empty gyms and in packed arenas with 30,000 fans, Pletzinger began to understand how Dirk and Holger’s philosophical insights on performance, creativity, and freedom enabled his success and longevity.

The Great Nowitzki tells Dirk’s dramatic story like never before. Pletzinger describes Dirk’s youth in small-town Germany, follows the steep learning curve of Dirk’s early seasons, the devastating Finals loss to the Miami Heat, and the triumphant championship five years later. Traveling with Dirk in his final seasons, Pletzinger immerses himself in the community of people impacted by Nowitzki’s game, interviewing everyone from average fans in Dallas and security guards at the arena to front office executives and Hall of Fame teammates, who reflect on what Dirk’s career means to the next generation of ballplayers. And to the game itself.

A masterpiece of sports writing that reads like a novel, The Great Nowitzki brims with a fan’s passion. Pletzinger shows how strongly basketball influences our imagination and the extraordinary journey an icon like Dirk Nowitzki must take to reach the pinnacle of the game.

Thomas Pletzinger is an award-winning German novelist, sportswriter, and basketball fanatic. He has won fellowships and teaching positions at the University of Iowa, New York University, and Grinnell College. He lives in Berlin with his wife and three daughters.
All the hours in the gym, all the defeats and victories, all the stories and memories - it takes an author like Thomas Pletzinger to find the right words for my world and my game. I couldn't have wished for a better one.
— Dirk Nowitzki

Pletzinger brings a sense of curiosity and discovery to the story of his German countryman…. He gains his subject’s trust early and carries it through to the finish, after all the cheers have died out and Dirk Nowitzki assumes his full-time role as down-to-earth dude.
— Chris Vognar - Texas Monthly

Nowitzki’s army of fans will devour this well-crafted account of a great player and a decent human being, and other hoops loved will come away happy to have better made his acquaintance.
— Jim Burns - Library Journal

[The Great Nowitzki] works not just as biography but as a story of sporting fame and fandom. Of the symbiotic relationship between a superstar and his city, country and the broad range of people touched by his feats of sporting greatness… [E]ngrossing, engaging and special.