Living in Two Worlds: Diaries of a Jewish Couple in Germany and in Exile (Hardcover) 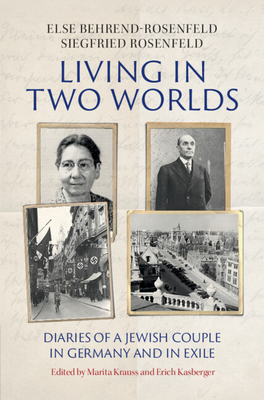 Living in Two Worlds: Diaries of a Jewish Couple in Germany and in Exile (Hardcover)


In Stock—Click for Locations
This unique collection of diaries and letters offers a vivid personal account of the experiences of a Jewish couple living parallel lives during the Second World War. While their children left for England just before war broke out, and Siegfried soon followed, Else Behrend was unable to obtain her visa in time, and remained in Germany. This volume includes Else's account of her years of persecution under the Nazi dictatorship, and of her life underground in Berlin, before her eventual daring escape to Switzerland on foot in 1944. Her dramatic story is presented alongside Siegfried's account of his very different experience, living penniless and in isolation in England, as well as some of her letters to her close friend and confidante, Eva. Complemented by QR codes that allow readers to listen to Else's own voice from her 1963 BBC interviews. Published in English for the first time, Living in Two Worlds offers an unforgettable and moving insight into the impact of the Second World War on everyday life.