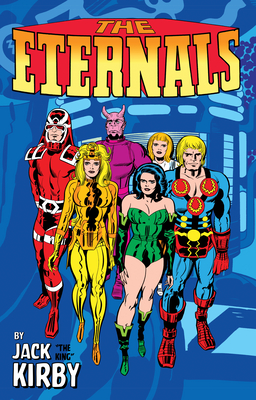 
Not On Our Shelves—Ships in 1-5 Days
(This book cannot be returned.)
The limitless imagination of Jack "King" Kirby unleashed countless creations into the world of comics. Captain America. The Fantastic Four. The Avengers. The X-Men. Each timeless creation was imbued with Kirby's inescapable graphic power, his boundless capacity for capturing the human condition and his eternal search for meaning in the cosmos. And Kirby's Eternals revealed an entire new realm of heroes! Once worshipped as gods, this fantastic group left Earth to explore the stars after warring with the Greek, Roman and Norse pantheons for supremacy over humankind. But the Eternals are just one part of a cosmic mythology. Their opposites - the Deviants - also secretly populate Earth, and the towering cosmic entities that created both - the Celestials - are fated to return and judge us all! COLLECTING: ETERNALS (1976) 1-19, ETERNALS ANNUAL (1977) 1