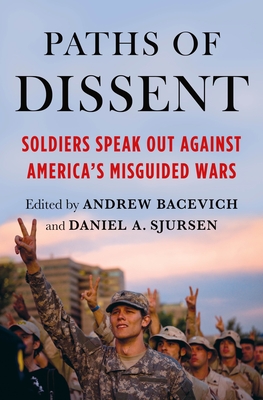 American veterans who fought in Iraq and Afghanistan offer invaluable firsthand perspectives on what made America’s post-9/11 wars so costly and disastrous.

Twenty years of America’s Global War on Terror produced little tangible success while exacting enormous harm. In Iraq and Afghanistan, the United States sustained tens of thousands of casualties, expended trillions of dollars, and inflicted massive suffering on the very populations that we sought to “liberate.” Now the inclination to forget it all and move on is palpable. But there is much to be learned from the immense debacle. And those who served and fought in these wars are best positioned to teach us.

Paths of Dissent collects fifteen original essays from American veterans of Iraq and Afghanistan—hailing from a wide range of services, ranks, and walks of life—who have come out in opposition to these conflicts. Selected for their candor and eloquence by fellow veterans Andrew Bacevich and Daniel Sjursen, these soldiers vividly describe both their motivations for serving and the disillusionment that made them speak out against the system. Their testimony is crucial for understanding just how the world’s self-proclaimed greatest military power went so badly astray.

Andrew Bacevich grew up in Indiana, graduated from West Point and Princeton, served in the army, became a university historian, and currently serves as the president and founder of the Quincy Institute for Responsible Statecraft, a nonpartisan foreign policy thinktank. He is the author, co-author, or editor of a dozen books, among them The Limits of Power, Washington Rules, Age of Illusions, and After the Apocalypse: America’s Role in a World Transformed.

Daniel A. Sjursen is a retired US Army officer, senior fellow at the Center for International Policy, contributing editor at Antiwar.com, and director of the Eisenhower Media Network. Along with fellow vet Chris "Henri" Henriksen, he co-hosts the podcast “Fortress on a Hill.” His work has appeared in the New York Times, Los Angeles Times, and The Nation, among other publications. He served combat tours in Iraq and Afghanistan and later taught history at West Point. Sjursen is the author of Ghostriders of Baghdad and Patriotic Dissent: America in the Age of Endless War.

“Paths of Dissent is superb, full of enraging and courageous writing at its best. This collection of sharp, thoughtful, painfully honest and intellectually probing essays from a wide range of American veterans offers absolutely critical perspectives on what we have done as a nation over the past two decades, and what we as individuals and as citizens need to do in response.”
—Phil Klay, author of Redeployment

“Through eloquent and candid essays by Americans veterans of Afghanistan and Iraq, Paths of Dissent reminds everyone of the power and the patriotism of genuine military dissent. Andrew Bacevich and Daniel Sjursen have done us all a service by lifting up the voices of those who served—and revealing the principled commitment that drives these veterans to challenge a system urgently in need of reconstruction.”
—Katrina vanden Heuvel, publisher of The Nation

“Enlightening... Any citizen who wants to better understand our country's current military entrapments will want to read this book.”
—BookPage (starred review)

“The contributors are excellent writers… An excellent, timely collection offering analysis of two decades of war and a broad swath of ideas and possible solutions to problems the military is largely incapable of fixing without outside attention.”
—Booklist

“Gripping… Full of potent criticism and anguished admissions of guilt, this is a visceral takedown of America’s forever wars.”
—Publishers Weekly