You Are a Champion: How to Be the Best You Can Be (Hardcover) 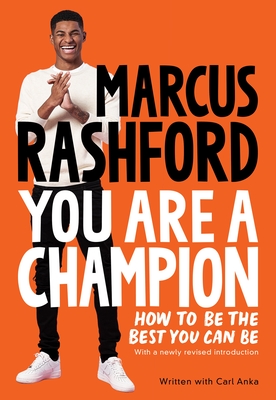 You Are a Champion: How to Be the Best You Can Be (Hardcover)

I want to show you how you can be a champion in almost anything you put your mind to.

Marcus Rashford MBE is famous worldwide for his skills both on and off the soccer field – but before he was a Manchester United and England soccer player, and long before he started his inspiring campaign to end child food poverty, he was just a kid from Wythenshawe, South Manchester. Now the nation's favorite soccer player wants to show YOU how to achieve your dreams, in this positive and inspiring guide for life.

Written with journalist Carl Anka, You Are a Champion is packed full of stories from Marcus’s own life, brilliant advice and top tips from performance psychologist Katie Warriner. It will show you how to be the very BEST that you can be.

It shows kids how to:
- Be comfortable with who you are – you can't be a champion until you're happy being you!
- Dream big
- Practice like a champion
- Get out of your comfort zone and learn from your mistakes
- Navigate adversity in a positive way
- Find your team
- Use your voice and stand up for others
- Never stop learning

With an afterword by Tim S. Grover.

During the lockdown imposed due to the COVID-19 pandemic, Marcus teamed up with the food distribution charity FareShare to cover the free school meal deficit for vulnerable children across the UK, raising in excess of 20 million pounds. Marcus successfully lobbied the British Government to u-turn policy around the free food voucher program – a campaign that has been deemed the quickest turnaround of Government policy in the history of British politics – so that 1.3 million vulnerable children continued to have access to food supplies whilst schools were closed during the pandemic.

In response to Marcus's End Child Food Poverty campaign, the British Government committed £400 million to support vulnerable children across the UK, supporting 1.7 million children for the next 12 months.

In October 2020, he was appointed MBE in the Queen's Birthday Honours. Marcus has committed himself to combating child poverty in the UK and his book You Are a Champion is an inspiring guide for children about reaching their full potential.

Carl Anka is a London-born journalist and broadcaster who likes his tea with milk and one sugar. He has written for the BBC, the Guardian, VICE< NME, GQ, and BuzzFeed among other publications online and in print, and specializes in writing about pop culture, video games, films and football. Currently a reporter for sports media group The Athletic covering Manchester United, he is the host of the Talk of the Devils podcast and is scared of talking on the phone.

Along with Marcus Rashford, Carl is the co-writer of You Are a Champion: How to Be the Best You Can Be – a positive and inspiring guide to life for young readers.