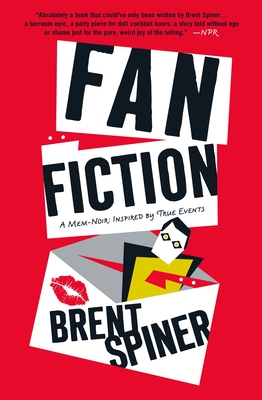 By Brent Spiner, Jeanne Darst (With)

Brent Spiner’s explosive and hilarious novel is a personal look at the slightly askew relationship between a celebrity and his fans. If the Coen Brothers were to make a Star Trek movie, involving the complexity of fan obsession and sci-fi, this noir comedy might just be the one.

Set in 1991, just as Star Trek: The Next Generation has rocketed the cast to global fame, the young and impressionable actor Brent Spiner receives a mysterious package and a series of disturbing letters, that take him on a terrifying and bizarre journey that enlists Paramount Security, the LAPD, and even the FBI in putting a stop to the danger that has his life and career hanging in the balance.

Featuring a cast of characters from Patrick Stewart to LeVar Burton to Trek creator Gene Roddenberry, to some completely imagined, this is the fictional autobiography that takes readers into the life of Brent Spiner, and tells an amazing tale about the trappings of celebrity and the fear he has carried with him his entire life.

Fan Fiction is a zany love letter to a world in which we all participate, the phenomenon of “Fandom.”

BRENT SPINER is an actor, comedian, and singer best known for playing the android Lieutenant Commander Data on Star Trek: The Next Generation from 1987-1994. He has appeared in numerous television roles, in films, and in theatre on Broadway, Off-Broadway and in Los Angeles. He currently has a role in the T.V. series Star Trek: Picard.

"[A] diverting memoir-mystery hybrid...Spiner’s debut is an homage to fans: where would celebrities be without them?" —Publishers Weekly

"Like the man himself, this book is funny, sharp, and brilliant. You’re going to love it, and Brent, even if you’ve never heard of “Star Trek”. It’s one of the most entertaining books ever written about entertainment." —Phil Rosenthal (creator, writer, producer), creator of Everybody Loves Raymond and star of Somebody Feed Phil

"Brent Spiner’s rollicking meta-memoir is a meditation on celebrity, Hollywood, fandom, ego, and self-discovery, hidden inside a black comedy shell. This wildly entertaining novel opens the doors to the Starship Enterprise and the making of Star Trek: The Next Generation even as it peers into the soul of the actor and the utterly crazy world around him. Richly comic and surprisingly moving, Fan Fiction is a gift to both Trek fans and general readers. So put on your Raymond Chandler fedora, or your Starfleet uniform, and settle in for a wild ride through the underbelly and outer space of Hollywood." —John Logan, screenwriter of Skyfall, Gladiator, The Aviator

"Both laugh out loud funny and painfully dark, Brent Spiner has created a fictional autobiography that is filled with surprises." —Jonathan Frakes

"Brent takes us all on a wild ride in this fanciful tale." —Leonard Maltin

"Of all the pleasures Fan Fiction affords the reader — a gripping plot, deftly and delightfully twisted; an insider’s slant on a pop culture mega-phenomenon; an affecting personal narrative of childhood trauma overcome; an insightful meditation on the ambiguities of fandom — the greatest and most singular is Brent Spiner’s prose style. Dry, urbane, acerbic, self-deprecating and gently absurdist, it evokes a lost age of Hollywood autobiography. If Groucho Marx had played Commander Data, this is the kind of memoir he might have written." —Michael Chabon, Pulitzer-Prize winning author

“This is an entertaining and subversive Brent Spiner in Wonderland.” —Locus Magazine

"...like a mix of 'Fatal Attraction' and Robert Altman’s Hollywood-noir 'The Player'...And it’s a lot of fun, zipping along with humour, plot twists and thrills..." —Toronto Star

“Absolutely a book that could've only been written by Brent Spiner...a barroom epic, a party piece for dull cocktail hours, a story told without ego or shame just for the pure, weird joy of the telling.” —NPR

"Absolutely excellent! Great fun for anyone who loves Star Trek: TNG and comedy noir. Reads like a lost Coen Brothers movie. Go get it!" —Robert Kirkman, creator of The Walking Dead