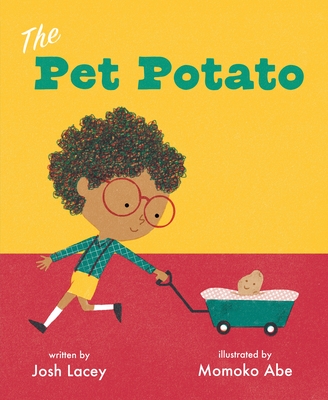 “Utterly charming and hilarious! When Albert gets a potato for a pet, he’s less than thrilled. He learns to get creative and discovers a most unlikely companionship. With droll humor and perfect illustrations, this is a read aloud winner!”
— Kathleen Carey, Book House of Stuyvesant Plaza, Albany, NY

Potatoes can't do anything a pet should. They can't learn tricks, or go for walks, or snuggle up with Albert.

But to Albert's surprise, his potato begins to grow on him, and soon he can't imagine having any other pet.

When the potato begins to rot, Albert is devastated. He buries it in his garden, and with a lot of care and a bit of patience, he discovers that his potato can do a great trick after all . . .

Josh Lacey is a British writer born and raised in London. Josh worked as a journalist, a teacher and a screenwriter before writing his first book, A Dog Called Grk. He has written several other children’s books including The Dragonsitter, Island of Thieves, and The Pet Potato. He also wrote the adult book God is Brazilian, a biography of Charles Miller.

Momoko Abe was born in Japan and has been drawing ever since she can remember. She moved to the UK to study filmmaking, and still works in the TV and film industry alongside her illustration work. Momoko is an AOI World Illustration Award Shortlist artist. She lives in London. She is the author and illustrator of Avocado Asks: What Am I? and the illustrator of The Pet Potato.

"A child who begs for a pet finally receives one, sort of, in this quirky picture book for fans of Sophie’s Squash... Playful, bold-hued vignettes by debut illustrator Abe portray a blossoming friendship that includes pretend play, trips to the playground and library, and shared tub time (the potato is perfectly dressed for each occasion)." - Publishers Weekly

"The titular spud’s amusing facial expressions and fashion (a pirate costume will be a hit with children who spot it) rendered in crayon-like strokes livens the book’s simple color palette...a great fit for a close storytime audience." - Bulletin of the Center for Children's Books

"[Lacey] convincingly portrays the transformation of a root vegetable into a sentient being, surely among the most magical powers of a child’s imagination. Abe’s vivid illustrations convey Albert’s (and his potato’s) emotions with subtlety and perception. A lovable choice for reading aloud." - Booklist

"With great style and gentle humor, The Pet Potato demonstrates how a vivid imagination can transform an ordinary spud into an extraordinary buddy." - BookPage