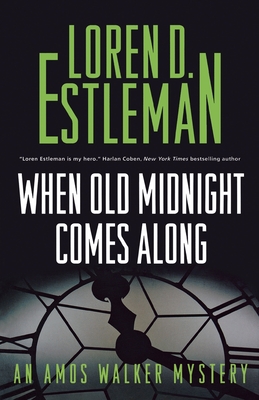 This is book number 28 in the Amos Walker Novels series.

Amos Walker is hired by one Francis X. Lawes, a private-sector mover and shaker in Detroit politics, to prove that his wife, Paula, who disappeared under sinister circumstances shortly more than six years ago, is dead, so he can remarry without having to wait for the seven-year-declaration-of-death rule to kick in.

Walker’s investigation is complicated by two facts: the police still consider Lawes the prime suspect, and the first-responding officer in that old case was killed in the line of duty shortly afterwards and his notebook has never been found. The question for Walker is, if Lawes is guilty, why would he put himself in jeopardy of arrest and prosecution by giving the forensics team a body to work on?

Loren D. Estleman is the author of more than eighty novels, including the Amos Walker, Page Murdock, and Peter Macklin series. The winner of four Shamus Awards, five Spur Awards, and three Western Heritage Awards, he lives in Central Michigan with his wife, author Deborah Morgan.

“Whatever your literary tastes, a shot of Amos Walker is always bracing....hanging out with Walker offers limitless pleasures.” —New York Times Book Review on When Old Midnight Comes Along

“Chandler and Hammett fans will feel right at home on the mean streets of Estleman’s Detroit.” —Publishers Weekly, starred review

“Come for the snappy patter, stay for the surprises.” —Kirkus Reviews

“Walker is the quintessential hard-boiled PI, a contemporary throwback to Philip Marlowe...A very good entry in an outstanding body of work.” —Booklist