Before John Was a Jazz Giant: A Song of John Coltrane (Paperback) 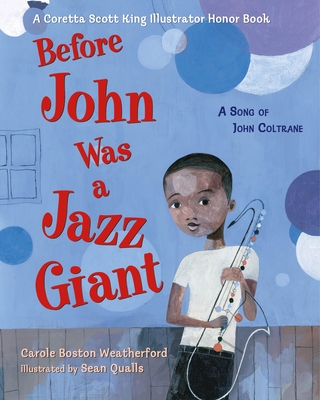 Before John Was a Jazz Giant: A Song of John Coltrane (Paperback)

A lyrical picture book biography of John Coltrane that focuses on his childhood.

Young John Coltrane was all ears. And there was a lot to hear, growing up in the south during the 1930s: church songs, preachers praying, music on the radio, and the bustling of the household. John was surrounded by all kinds of vivid noises that shaped his own sound as a musician. With vibrant words and glowing colors, Carole Boston Weatherford and Sean Qualls compose an amazingly rich hymn to the childhood of jazz legend John Coltrane.

Before John Was a Jazz Giant is a 2009 Coretta Scott King Illustrator Honor Book and a 2009 Bank Street - Best Children's Book of the Year.

Carole Boston Weatherford is the award-winning author of more than 50 books of poetry, nonfiction, and children's literature. She is the recipient of a Newbery Honor, Coretta Scott King Author Honor, two NAACP Image Awards, a WNDB Walter Award, and numerous other accolades. Her books include I, Matthew Henson; Jesse Owens: Fastest Man Alive; and Be a King. She resides in North Carolina where she teaches at Fayetteville State University.

Sean Qualls illustrated the widely acclaimed biographies The Poet Slave of Cuba and Dizzy. He lives with his wife and son in Brooklyn, New York.

“Even children who are unfamiliar with jazz in general and John Coltrane in particular may find their interest piqued.” —Horn Book

“Will echo with contemporary children, who will recognize the music in their daily lives.” —Booklist

“This is as much a subtle invitation for children to listen to their own worlds as it is a Coltrane biography.” —Bulletin of the Center for Children’s Books