The Pink Line: Journeys Across the World's Queer Frontiers (Paperback) 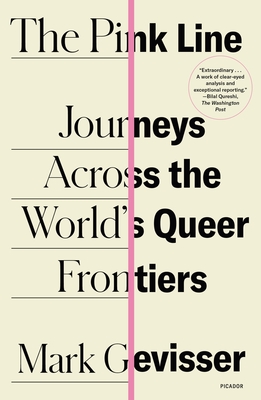 The Pink Line: Journeys Across the World's Queer Frontiers (Paperback)

"[Mark] Gevisser is clear-eyed and wise enough to have a sharp sense of how tough the struggle has been, and how hard it will be now for those who have not succeeded in finding shelter from prejudice." --Colm Tóibín, The Guardian

More than seven years in the making, Mark Gevisser’s The Pink Line: Journeys Across the World’s Queer Frontiers is an exploration of how the conversation around sexual orientation and gender identity has come to divide—and describe—the world in an entirely new way over the first two decades of the twenty-first century. No social movement has brought change so quickly and with such dramatically mixed results. While same-sex marriage and gender transition are celebrated in some parts of the world, laws are being strengthened to criminalize homosexuality and gender nonconformity in others. As new globalized queer identities are adopted by people across the world—thanks to the digital revolution—fresh culture wars have emerged. A new Pink Line, Gevisser argues, has been drawn across the globe, and he takes readers to its frontiers.

Between sensitive and sometimes startling profiles of the queer folk he’s encountered along the Pink Line, Gevisser offers sharp analytical chapters exploring identity politics, religion, gender ideology, capitalism, human rights, moral panics, geopolitics, and what he calls “the new transgender culture wars.” His subjects include a Ugandan refugee in flight to Canada, a trans woman fighting for custody of her child in Moscow, a lesbian couple campaigning for marriage equality in Mexico, genderqueer high schoolers coming of age in Michigan, a gay Israeli-Palestinian couple searching for common ground, and a community of kothis—“women’s hearts in men’s bodies”—who run a temple in an Indian fishing village. What results is a moving and multifaceted picture of the world today, and the queer people defining it.

Eye-opening, heartfelt, expertly researched, and compellingly narrated, The Pink Line is a monumental—and urgent—journey of unprecedented scope into twenty-first-century identity, seen through the border posts along the world’s new LGBTQ+ frontiers.

Mark Gevisser is the author of the prizewinning A Legacy of Liberation: Thabo Mbeki and the Future of the South African Dream and Portraits of Power: Profiles in a Changing South Africa. He is the coeditor of Defiant Desire: Gay and Lesbian Lives in South Africa. His journalism has appeared in The Guardian, The New York Times, Granta, and other publications. He is the writer of the documentary film The Man Who Drove with Mandela, which won the Teddy Documentary Prize at the Berlin Film Festival. Born in Johannesburg in 1964, he now lives in France.

"Extraordinary . . . a hugely ambitious and exceptional work of long-form journalism . . . [The Pink Line] is a work of clear-eyed analysis and exceptional reporting, and it deserves a wide and non-LGBT readership that wishes to understand these frontiers. What elevates the book is Gevisser’s poetic and queer gaze, his searching language about why he has dedicated almost a decade of his life to understanding a generational transformation." --Bilal Qureshi, The Washington Post

"This is a valuable book not only for the quality of Gevisser’s analysis and the scope of his research, but because he spends a good deal of time with the people on whose lives he focuses . . . He hangs out with them, enjoys their company; he renders them in all their complexity. Gevisser is also alert to the connection between gay freedom and other forms of liberty." --Colm Tóibín, The Guardian

"Gevisser approaches his subjects with empathy, seeking to record their stories in their words. Moreover, these interactions push Gevisser to reexamine his own beliefs, adding nuance . . . [Gevisser's] introspection gives the book its intellectual scope, enacting a kind of critique and corrective to gay imperialist rhetoric . . . Gevisser is not just after equality, but rather mutual intelligibility and empathy. Perhaps these are the bedrock on which to build a new queer activism for the whole world." --Samuel Huneke, The Baffler

"Through a series of personal narratives—lesbians seeking parental rights in Mexico, a third-gender community in Kerala—Gevisser explores how globalization, the Internet, and international development have brought clashing ideals of gender and sexuality into new configurations." --The New Yorker (Briefly Noted)

"Gevisser clearly shows the impact of large, sweeping tides of complex histories on specific people. This is where the strength of this book lies: letting people speak out for themselves against the wider political and social backdrop that Gevisser paints for the reader. Long after finishing the book, it’s the individual stories of the likes of Pasha in Moscow, or Michael, the Ugandan refugee in Nairobi, that will stick with you . . . a meticulously researched book." --Andrew McMillan, The Observer

"[Gevisser] approaches [his] task with bravura, care and deliberation . . . a virtue of The Pink Line is [Gevisser's] determination to let individuals speak for themselves and, critically, to respect the labels they choose." --Richard Canning, Literary Review

"A masterful book-length study that offers one of the broadest and most insightful surveys yet of queer struggles around the world . . . The strength of Gevisser's work lies in the power of his reportage . . . an addictive and compelling read, a literal page-turner that conveys in full measure the rich and, in many ways, beautiful lives of its protagonists." --Rhea Rollmann, PopMatters

"Gevisser’s monumental effort in this global deep-think of a text outlines how much work remains ahead. This necessary, timely, intelligent book belongs in every library, the world over."--Booklist (starred review)

"The Pink Line makes impressive strides in chronicling distant and recent LGBT history and progress across the world. . . the humanity and tension with which Gevisser portrays his subjects keeps the prose engaging alongside his incredible and seemingly encyclopedic knowledge of LGBT world history. . .this work moves the observation of the evolution of LGBT life and culture to the global scale and is a must-read for all interested in gender studies."--Library Journal, (starred review)

"Fascinating . . . a thoroughly researched picture of some very brave people around the world who are dealing with permutations of sexual identity in societies that feel threatened by gay liberation, not to mention the refusal of the male-female binary." --Andrew Holleran, Gay and Lesbian Review

"[An] expansive and deeply sourced inquiry . . . Gevisser’s non-Western point-of-view and exhaustive research provide essential perspective on the threads connecting gay, lesbian, and transgender communities worldwide. This impressive work is a must-read for anyone invested in social justice and LGBTQ rights." --Publishers Weekly

"In this masterful recounting of sexuality and identity around the globe, Mark Gevisser achieves an almost shocking empathy. His accounts are riveting, brilliantly researched, liberal, and forthright. He talks to people with and without privilege, of every race and of every nationality, limning the aspects of queer experience that are universal and those that are local. In intimate, often tender prose, he brings to life the complex movement for queer civil rights and the many people on whom it bears. Whether recounting suffering or triumph, Gevisser is a clear-sighted, fearless, and generous guide." —Andrew Solomon, author of Far From the Tree: Parents, Children, and the Search for Identity

“Mark Gevisser's The Pink Line is a book I've been waiting a long time for: a global geography of queer struggle, a wide-ranging, open-hearted, beautifully told account of the radically various state of LGBTQ rights in the world. This is a book that should be very widely read—and not only read, but acted upon.” —Garth Greenwell, author of What Belongs to You and Cleanness

"The Pink Line traces a planet-spanning fissure that runs through the most intimate dimensions of life, documenting the sometimes literally war-torn rift zones where so-called 'traditional values' are being mobilized by states to combat trans, queer and feminist social movements. A smart and sobering book for our times." —Susan Stryker, author of Transgender History: The Roots of Today's Revolution

“Mark Gevisser's sensitive yet firmly broad book coheres the concept of a 'pink line': the difference between the wish of queer individuals for autonomy, versus the increased manipulations of gay and trans identities to shore up power systems. His book is both enlightening and disturbing in a world where the wish to be understood can become a commodity of domination.” —Sarah Schulman, author of The Cosmopolitans

“No one understands queerness from an armchair — and few have captured that truth better than Mark Gevisser. The Pink Line is a vital exploration of queerness around the globe, searching and intimate but also expansive in its scope. Like all the best writing about LGBTQ lives, this book clearly changed its author. It would be impossible not to be transformed by the reading of it.” —Samantha Allen, author of Real Queer America: LGBT Stories from Red States

"The Pink Line is a deep diagnostic account of the ways in which queer lives and queer loves cross the fraught frontiers of race, rights, discrimination, and denigration to transition from agony to agency, and isolation to community. Mark Gevisser has given us a rare piece of writing in which the quotidian confrontations and consolations of everyday life build into an encyclopedic vision of the global frontiers of the queer condition. This is politics and poetry all at once. Gevisser occupies the front-lines of sorrow and struggle with his informants who, in becoming his friends and comrades, together define an activism of defiant desire unafraid of the ambivalences and contradictions of the human condition. The Pink Line is a remarkable narrative of resilience, romance and realism." —Homi K. Bhabha, author of The Location of Culture